The other day I noticed my husband had gone out to the new cleared "meadow" with a wheelbarrow and a crowbar to pry up some largish rocks that were buried in the area we will have to brush-hog.  His choice of tools and lack of scheduling indicated the level of effort he was planning to put into it. Minimal. Then, I noticed he had gone for the big tractor and a logging chain.  Something was afoot.
He had come across a concrete slab buried in the mud near the road.  Over the years we've put some concrete in the area for fill.  This was not that.  This was heavy old concrete that pre-dates any of our existing information (which goes back almost hundred years).  It appeared to be poured in place.  It had no date on it which was fairly common practice.  And it was heavier than anything we had equipment to move. 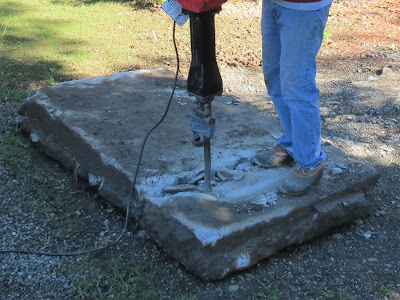 Unfortunately the backhoe is off the tractor for the winter.  Our 43 hp tractor was able to lift the weight but having no backhoe meant the tractor did not have the balance to control it.  I should have taken photos of the nearly one ton slab dangling from the loader, but at the time I was standing on the back blade trying to keep the tractor from tipping over.  We got it to the road and were going to continue on, but had we suffered a mishap like a blown hose or a peeled tire we would have been in a pickle.  So it was dropped at the edge of the drive.  We borrowed the neighbor's jackhammer and cut it down to size.  Then we threw it back in the mud.  There is one area out there that is going to need a lot of fill to make it accessible.
Now that autumn is underway I have been gradually cutting down the ugly and cleaning up for leaf season.  The garden is nearly completely empty.  Two beds are in use and seven of the beds are mulched.  Two are still growing Buckwheat and the last one will have tulip bulbs planted before mulching. 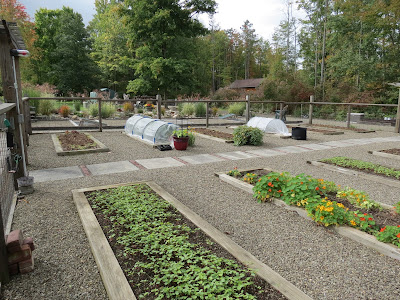 There are still plenty of pretty things in the landscape. 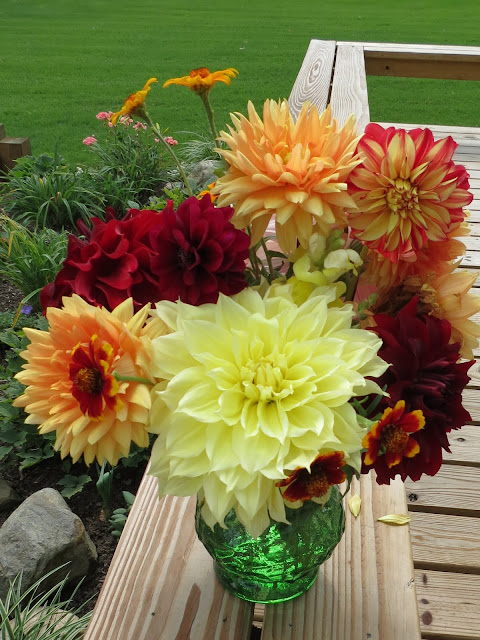 Now that I'm outside a little less it is easier to cut Dahlias and bring them in.  Especially before a day of wind and rain which will only break the heavy blooms down anyway.
Today is dry but cool.  Currently 52 degrees at noon with a forecast high of 58.  Partly cloudy and breezy.  I have thick pork chops in the slow cooker and a glass of cider at the ready.
A pre-hibernation practice run.
Posted by SmartAlex at 11:52 AM