The Garden Shed / Chicken Coop is finished. Tim and I each have one part of the project left. His is the chicken fence, and mine is the window shades in the garden shed to keep it cooler in the summer.
So here is the Before when we moved it from the house next door (that we sold to Mike and Shelly): 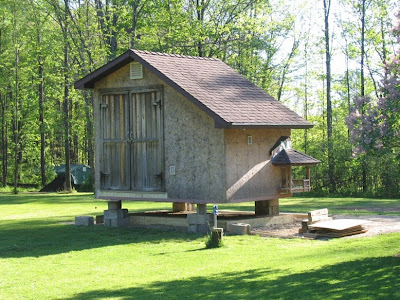 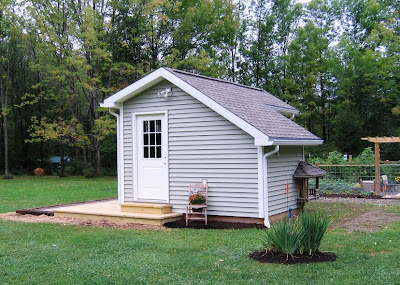 It has doubled in size, and Tim has finished the walkway and the deck so that we don't have mud splashing up on the siding, and we aren't tracking in all kinds of dirt. You can't imagine how much dirt sticks to dewy work boots. Because of the electric lines being dug in, there has been a nice patch of dirt right in front of the door for months. 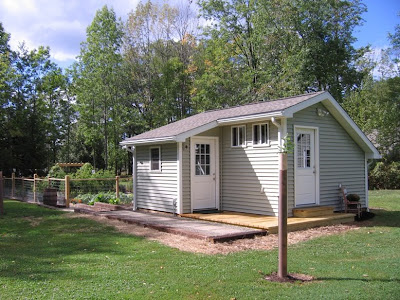 See the apple tree in the tube in the foreground? That is one of the scions I sent down to Horse Creek back in the spring of 2009. It is growing by leaps and bounds and we had to add to the tube to keep the deer from trimming it. The second one is in the foreground of the picture below and is growing, but not as vigorously. 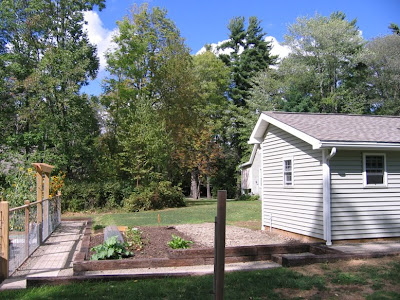 The gravel right behind the shed will be part of the chicken run, and the mulched area is my "perennial foods" garden where I relocated my strawberries, rhubarb and horseradish. Next spring I will add a row of asparagus. I decided to leave my first asparagus bed where it was to see if it can't make a go of it since it seems to be improving now in year 3. The Rhubarb has more than quadrupled in size since transplanting, and the Horseradish has come back to life. 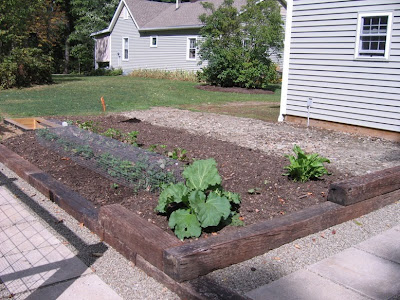 Tim went above and beyond the call of duty inside the shed. We chose maple cabinets from the discount outlet and bought a small refrigerator which is great for storing "excess produce". Aside from a few cucumbers, it mostly holds beer, wine and mixers. It does make it nicer to grab a refreshment when working or socialising outdoors, and cuts down on the foot traffic in and out of the house. 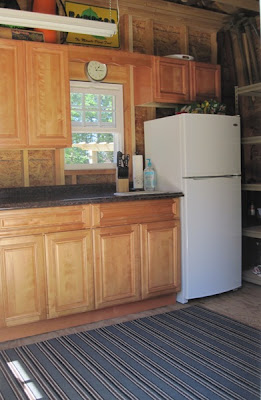 Tim removed the center of the face frame and reattached it to the right hand door so the base cabinets open all the way making it easier to tuck all my larger items away. 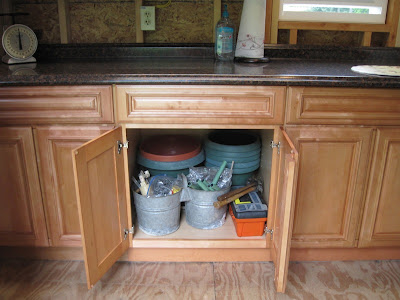 The long handled tools are hung on the opposite wall, and the third wall has commercial shelving for storage of tomato ladders, window boxes and other plant supports. 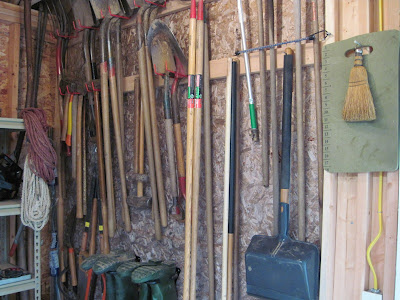 I have a few neat garden collectables to display in here, but we haven't gotten around to cutseying it up yet.

Posted by SmartAlex at 8:40 PM