Rototiller and the Marigold Stomp

Today was the big day for "Un-gardening". The tomatoes came out, and everything got cleaned up in preparation for the war against the falling leaves. In the past, this was a pretty labor intensive day. Neighbor Mike and I would roll up the 200 feet of no climb horse fence. Tim and I would pull the T-Posts with the bucket. Then, the rottotilling would begin. The rottotilling was actually the easy part since we had a 5 foot PTO driven tiller for the smaller tractor. But, the rolling of the fence alone diminished the benefits of the tractor tilling. 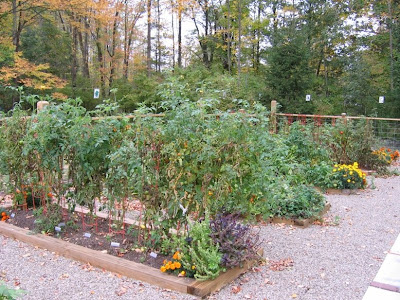 The garden was beginning to look a little rough with bacterial spec taking over several of the tomato plants, and leaves littering the walk. I started last week picking green tomatoes, and there are ALOT of them. Although they have stopped ripening on the vine in this cooler weather, they will continue to ripen in the dark after you pick them. The ones that don't get made into fried green tomatoes (my favorite dish while watching football) should be individually wrapped in newspaper so they will ripen, and you can continue to enjoy tomatoes for a couple of months. My mother has been known to stretch her tomato season as far as December! 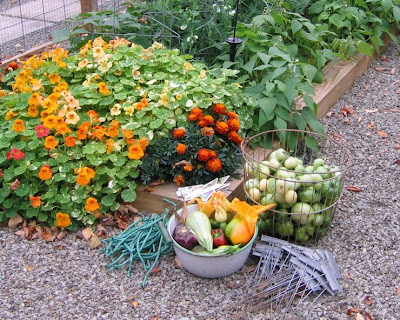 First I went through and removed all of the twisty ties and tags. Next, you pick whatever you intend on saving. Then I began a vigorous pruning, removing all the foliage until all I had left were tomato trunks inside the supports. After the supports were removed, we pulled the roots out. I took the poles out of the pole beans, leaving large, spineless, blobs of foliage. 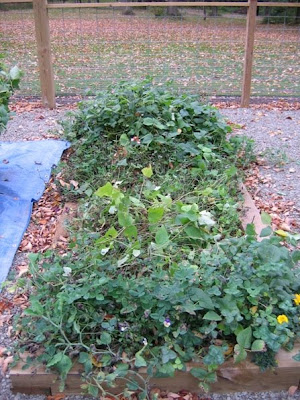 We filled the tractor bucket with most of the tomato waste and put that on the burn pile. The beans, clover, marigolds, and basil were destined for the compost pile. We have filled this compost tube several times this summer, and it breaks down at an amazing rate leaving plenty of head room. Here's a picture of Tim doing the "marigold stomp" trying to get the last wheelbarrow in. We have plenty of rain fore casted for this week, and I guarantee that tube full of garden trimmings will be reduced by half in a week. 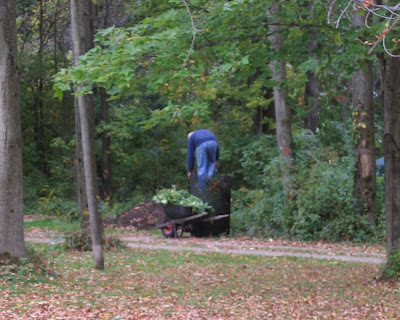 We tried out best to rake up all of the fallen tomatoes, but I guarantee you there will be plenty of Sungold volunteers next year, just like this one which popped up in Mike and Shelly's cucumber bed mid-summer. 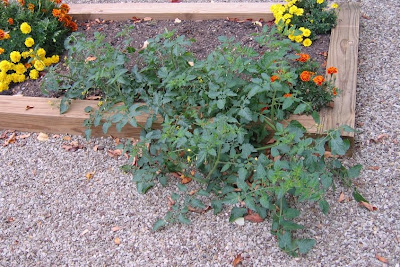 When it was all said and done, we were left with a row of parsnips and my fall garden which consists of beans, peas and carrots. I also have half a bed planted with lettuce that is just beginning to poke through the soil. 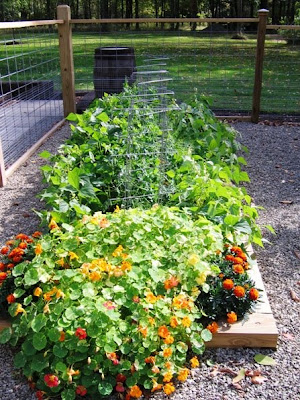 The garden looks much bigger with all of the beds empty. 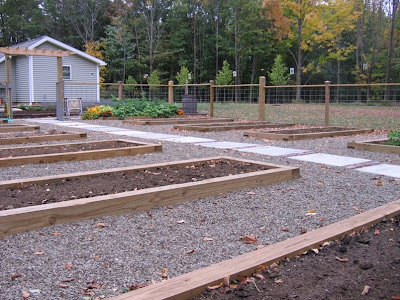 Even with the garden gone, we now have to deal with a glut of produce. The best recipe to cope with this is Ratatouille which combines tomatoes, eggplants and summer squash among other things. Really it's a perfect dish for a day like this. Tim calls it "Rototiller" which is a pretty descript name since you chop up everything you find in the garden before you run the tiller through. I mean, what else do you do with a dozen Little Fingers eggplants? 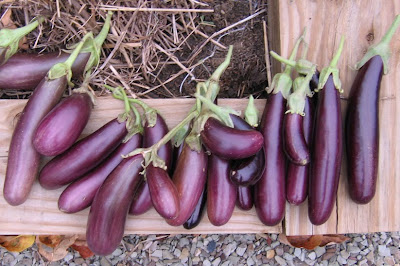 My mother is very good at dealing with these garden combinations. She makes the recipes up as she goes, and she can turn this menagerie... 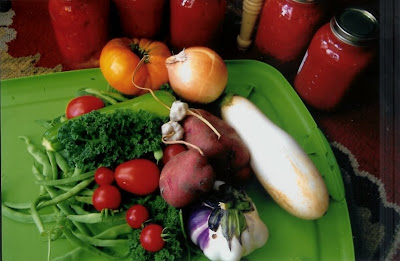 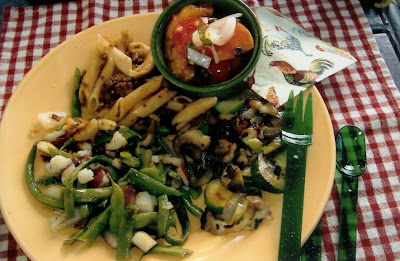 And furthermore, her husband has adventurous taste buds, and he will eat it.

So for anyone who's interested, here's a recipe for ratatouille. Tim is getting reheated stew for supper, and I'm off to try my hand at frying stuffed squash blossoms!
Ingredients
2 onion, sliced into thin rings
3 cloves garlic, minced
1 medium eggplant, cubed
2 zucchini, cubed
2 medium yellow squash, cubed
2 green bell peppers, seeded and cubed
1 yellow bell pepper, diced
1 chopped red bell pepper
4 roma (plum) tomatoes, chopped
1/2 cup olive oil
1 bay leaf
2 tablespoons chopped fresh parsley
4 sprigs fresh thyme
salt and pepper to taste
Directions
Heat 1 1/2 tablespoon of the oil in a large pot over medium-low heat. Add the onions and garlic and cook until soft.
In a large skillet, heat 1 1/2 tablespoon of olive oil and saute the zucchini in batches until slightly browned on all sides. Remove the zucchini and place in the pot with the onions and garlic.
Saute all the remaining vegetables one batch at a time, adding 1 1/2 tablespoon olive oil to the skillet each time you add a new set of vegetables. Once each batch has been sauteed add them to the large pot as was done in step 2.
Season with salt and pepper. Add the bay leaf and thyme and cover the pot. Cook over medium heat for 15 to 20 minutes.
Add the chopped tomatoes and parsley to the large pot, cook another 10-15 minutes. Stir occasionally.
Remove the bay leaf and adjust seasoning.
Posted by SmartAlex at 4:49 PM