The Mid-Summer Slump (not)

The mid-summer slump is late.  My garden looks far from slumpy.  In fact, it looks pretty fresh and new.  Maybe not June-new, but still pretty good.  Despite the fact that in July we went almost three weeks on only 1/4 inch of rain.

The first planting of cucumbers was dwindling off and beginning to show signs of age.  Instead of letting the leaves deteriorate and foster diseases, I pulled them out.  I  have a row of Goldmine Bush beans planted there.


I am still waiting on my first ripe tomato.  It is WEEKS late.  I have been getting one or two ripe Sungold cherry tomatoes each day from each of my two plants.  Which is barely enough to garnish a salad.  I am waiting for the time when I have handfuls to make tomato, cucumber and feta salads.


The bell peppers that were setting as I planted them this spring are beginning to ripen.  The plants that I pinched back pretty vigorously in June are setting a good amount of fruit.  Luckily these are in containers so if it takes them forever to mature, I can protect them from frost.

We have had dry weather, hot weather, cool weather, damp weather and still the garden is weathering it all.  There is a little mildew showing up on one of the yellow summer squash plants, but nothing to be alarmed about.  As I've often noticed, it is the varieties with plain green leaves that succumb first, and squash with lighter lacing running through their leaves hold out the longest.  If it gets too bad I will just pull it out.  We've had very few bad bugs this year.  So all in all it has been an easy year so far. 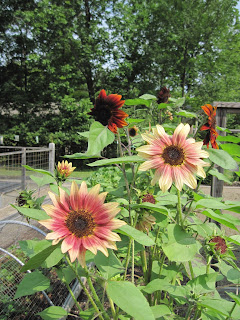 Posted by SmartAlex at 6:14 PM