August Progress - the end of some things

How many rows of bush beans can you get into a three foot wide bed?
If it's Purple Queen - One Row. 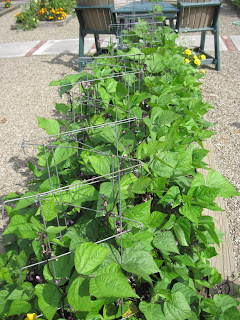 They like to climb two to three feet tall 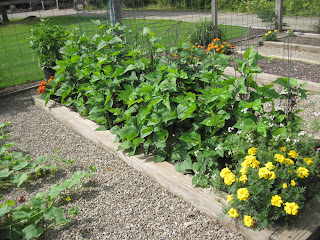 I've been picking an earlier planting of yellow wax beans for two weeks,
but the purple are going to be ready in a day or two. 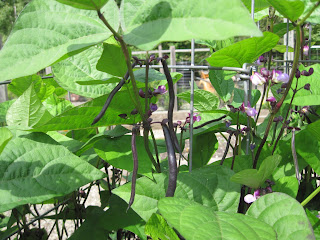 Back in June my father was the one who first said "my peppers are shaped funny".
And I knew exactly what he meant.  Most of my bell peppers are pointy.  The three below all came from plants in the same four pack.  The pointy ones seem to stay pointy and the nicely lobed ones seem to start out that way.  I haven't been able to find any explanation on the internet about that.  Some suggest that you wait to pick them until they fill out and the lobes push past the center point (as seen in the center pepper) but it doesn't happen.  As you can tell from the deep color of the pointy one on the left, it is very ripe and shows no sigh of reshaping.  If anyone knows the science behind this I'd love to hear it.

The peppers are slow but still putting out a lot of blooms and baby peppers.  Luckily these are in pots so they will not have to be pulled out when we put things up for winter.  The pots can come up against the garden shed and be protected from frost for weeks after the garden beds would last. 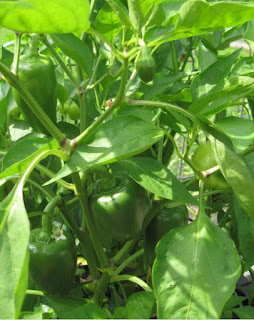 The summer squash bed is about done.  The powdery mildew has taken over and they are not putting out any new flowers or growth. 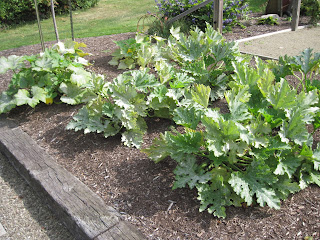 But the zucchini plant on the other end in its own bed is still thriving. 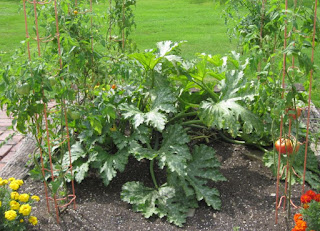 I am still getting cucumbers from the second planting, and PLENTY of Sun Gold cherry tomatoes but my Celebrity plant died last night. You can see about 8 inches up from the ground it has a very blighted stem area and the entire plant was suddenly wilted.  I harvested all the tomatoes and pulled it up.  I have enough Pineapple tomatoes to keep me going and the other varieties are still waiting to ripen. 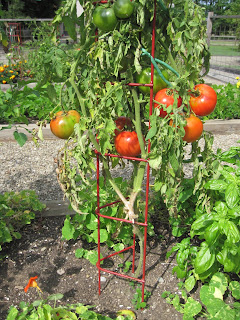 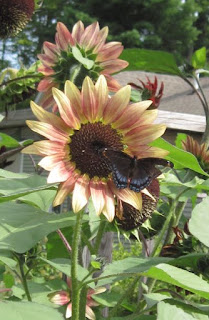 Posted by SmartAlex at 3:24 PM