The thing about bush beans... 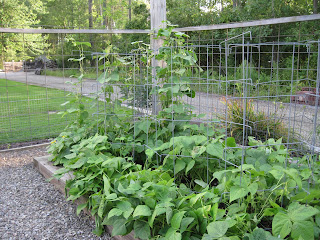 The thing about bush beans is that you always get one smart-alec in the group who thinks he's a pole bean.  These are the neighbor's green beans this week.  I think they may be Burpee's Tenderpick.  I've had bush beans do that every year, but it is usually the Purple Queen.  It is interesting to see that I am not the only person who has run into this.

The plant specs say that they should grow to 15"-20" but taint so.  They will be 24"-36".  So I always plant them around pea-fence, and the neighbors also planned wisely this year and did the same.  Normally, my Goldmine bush beans do not get as tall, but this year they are also getting way too tall and flopping over.

The reason this is undesirable is that the plants cannot support a heavy load of beans and they will stub the beans against the ground giving you curly, unattractive beans instead of long straight bundles of beans.  That will be particularly true if you have enough dry heat to cause your plants to wilt each afternoon.

See, that's the thing about bush beans.  They don't know they're supposed to bush.  They would always prefer to climb.
Posted by SmartAlex at 6:09 PM