It's 93 degrees out. This must be Pickle Day

I was unaware that we were expecting a heat wave.  But it got up past 93 degrees today.  With some humidity to boot.  This is the third Sunday in a row that we have canned something.  First dill slices then bread and butter slices, today sweet pickle relish.  Relish is simple but seems more time consuming because of all of the chopping. 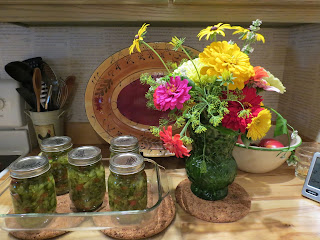 As Tim peered over my shoulder this morning I said "I tried this with the food processor once but all you get is "  Mulch?  he asked.  Yes.  Mulch.  That's pretty accurate.  So it's hand dicing.  And I am not proficient at hand dicing.  But I diced up 4 pounds of cucumbers, an onion and a red bell pepper.  That made 13 cups of material.  After that it was easy.  I was aiming for six pints (12 cups?) but ended up with only 5 pints after it cooked down.  "That's it?"  Tim asks. "That's it?  It's cheaper to go by a jar of relish."  Yep.

I've been reading the book "Little Heathens: Hard times and High Spirits on an Iowa Farm During the Great Depression".  This is a great book to read if you miss having your grandparents around to tell tales of their childhood.  One thing I've been mulling over is the laundry facts.  That Monday was laundry day and housewives wore one dress all week.  I think not.  I think they must have at least had two to switch on and off while the other one dried.  Because even with air conditioning, my minimum is two sets of clothes a day. 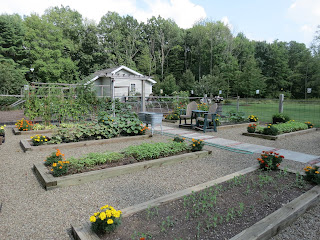 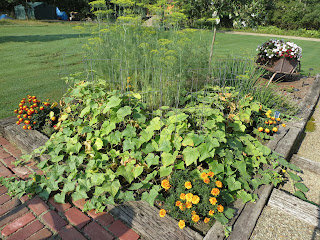 The Pickle Bed is about played out. 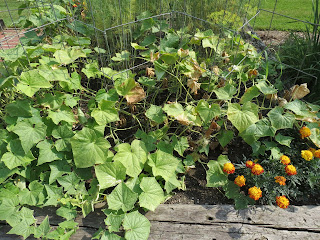 This is about the time when the newbies on Facebook start freaking out and asking "What's wrong with my cucumber vines?!?"  They're old.  They're tired.  They're giving up.  Nothing lasts forever.
I remember when I could stand at this spot and not be able to peer through and see any cucumbers.  Only a wall of leaves.  Beautiful, lush, green leaves.  Now they're old and withered.  Threadbare. 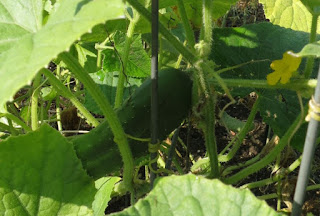 There are still some nice little cucumbers coming.  But the rush is over. 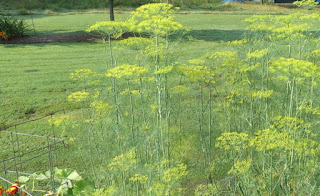 I remember when I was worried that I wouldn't have any dill.
Next project is sweet dills.  The dill blooms are just right. 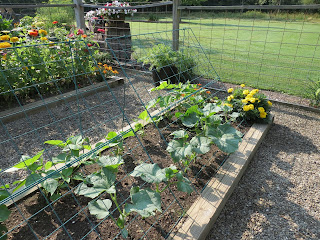 The second planting of slicing cukes will be blooming soon.  I had trouble with the germination on these this year.  Two different packets of the same thing planted at three different times, and about 50% germination.  Not typical.  But still enough cucumbers. Just not an excess.

The first vines are still healthy and producing.  I have seen exactly ONE cucumber beetle.
Which is fine by me. 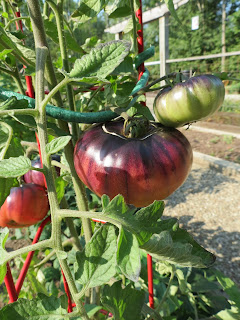 The Blue Beauty tomatoes are ripening.  These are a nice little tomato that's fun to grow now and then for the novelty.  But they are on the small side.  It takes two slices to make a sandwich. 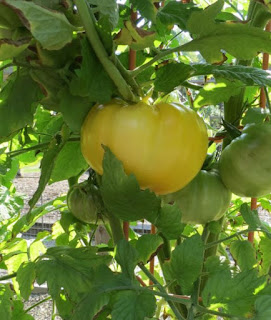 Lenny and Gracie's Kentucky Heirloom is more my style.  This is a nice, flavorful, sweet tomato and large so one slab of tomato makes a complete sandwich.  The vine is about seven feet tall.  I'll have to remember to put her in a stacking ladder next year. 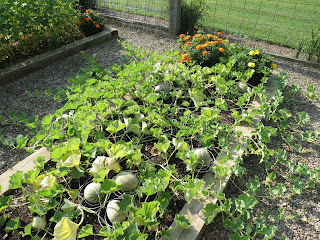 Cantaloupe Success
They should be ripe in a week or two.  The vines are beginning to suffer in the heat, even with a good morning soaking.  But they get shade around 4pm and recover quickly. 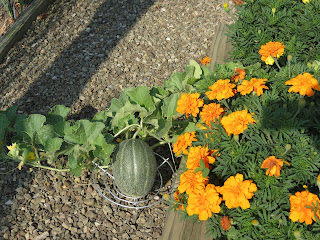 They are pretty melons 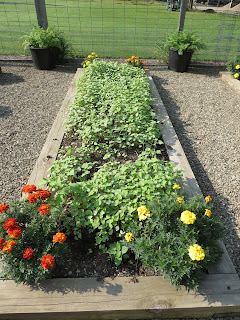 This is one of the earlier Buckwheat beds.  This is all reseed.  Two of the early beds I've already raked in.  The cut stems below have composted well, and the second growth is now true "green manure".  Pretty good bang for your buck(wheat)  haha. 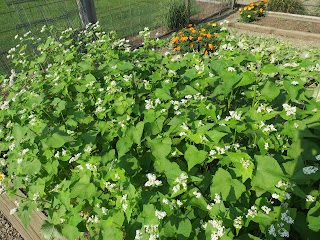 This is a later planting of Buckwheat that went in after the garden peas were done.  They are just now beginning to flower well and soon they will be full of bees. 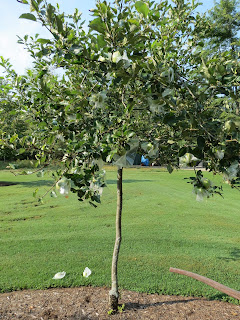 The apples are now about as big as my fist.  We're going through a period of dropping due to hot dry weather.  I find one or two apples shed on the ground several mornings a week.  There are still a few dozen left and they will be over 10 ounces each.  It takes only one and a half apples to make a deep dish apple pie. 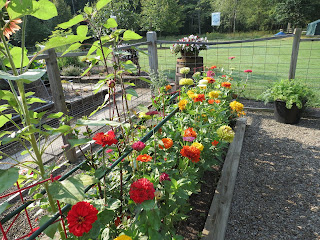 The zinnias are beautiful and the dinner plate dahlias are juuuuust beginning to open up. 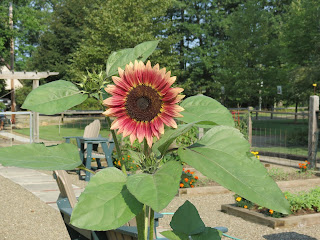 I put in a few sunflowers here and there to fill in gaps.

Well, that's the garden right now.  Everything is working pretty well.  Maybe next weekend I'll do my annual "garden of Good and Evil" post.  I can probably find something going wrong in there

Posted by SmartAlex at 5:31 PM