Compost and the Chipper Shredder 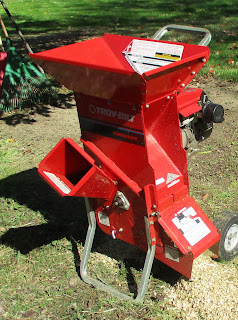 Up until now, our compost material has been chiefly horse-manure.  We compost our kitchen scraps and selection of plant trimmings throughout the year and when the compost tube is full we incorporate it into the manure pile.  But in the fall when we cut back all of the vegetation, we end up wasting a lot of compost opportunity.  We just pile it at the edge of the woods and let it return to nature.  With the effort involved with sourcing, moving and composting horse manure, it makes much more sense to make use of all this green yard waste instead.

Last year while Tim was watching me chop down and manage my buckwheat cover crop, he decided we needed some sort of shredder to deal with the long, woody stems that end up in a tangle.  This year when I gathered up my cornstalks, he decided it was a necessity.  How could we possibly waste all of those cornstalks? 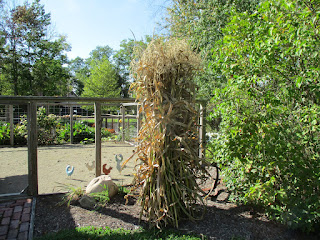 We had researched on-line several different brands and sources for a chipper shredder.  Since we live in a retail dead-zone, there aren't too many ANY places you can just walk in and comparison shop for a chipper.  We could mail order one.  Or Tractor Supply could order one in. We wouldn't see what we were buying until we unpacked it.

It just so happened, that the weekend we were planning to go to the new farm supply store opening in town to see their single offering, a DR Chipper Shredder, we stumbled upon a (never) used vintage model sitting in a garage at an estate sale.  And when I say never used I mean there had never been gas in the tank.  The man had purchased it in 1994 and just stored it in his garage. And now we know why - because it is a fearsome beast not for the faint of heart.  But I digress.  It was now part of his estate, and no one knew anything about it other than that they had the receipt from 1994.    A deal was struck for a bargain price and the chipper came home with us.  What Luck!

It is a Troy-bilt Tomahawk with a 5 hp Tecumseh motor.  Just a starter model.  Troy-bilt also had 8 hp Briggs-Stratton motors and those Tomahawks are 2 inches wider.  Remember back in the 90s when we started to complain that they didn't make things like they used to?  It hadn't gotten that bad yet.  I am now complaining that they no longer make things like they did in the 90s.  It makes the $800 DR model at the farm supply store look like a child's toy from Dinkytown.

This older Troy-bilt is big, beefy, weighs about three hundred pounds and is a fearsome beast.  The motor tried to start up on the second pull.  After sitting for twenty-five years.  Another couple of tries and it roared to life.  When we tried to engage the lever that runs the flails, the motor smoked the belt and stopped dead in its tracks.  The sticker says to "engage the lever slowly" and they mean SSSLLLOOWWWLLLYYY.  You have to put just enough friction on the belt to get the flails spinning, and gradually increase the speed until the motor and shredder RPMs are compatible, and then and only then can you lock the lever all the way.  I'll be that poor guy tried to engage the flails, scared the pants off himself with all the squealing and the smoking, and decided to never try again. And I don't blame him

Once it is running it will pulverize anything you let it get ahold of.  Its like a slightly unhinged horse or cow (or dog) that you don't really trust but treat with respect, and get along with just fine, until one day it turns on you, pins you up against the barn wall, and tries to kill you. The first time we stuck a cornstalk into the shredder hopper, it disappeared instantaneously.  Quicker than the eye.  There one instant and gone the next.  Holy Shit!

But there is a problem with the cornstalks.  They are full of corn syrup and very sticky, even after being cut and dried for a couple of weeks.  The Tomahawk came with a discharge screen with  3/4" holes.  The cornstalks gummed up pret. ty. quick.  We found that we had to stop the chipper every five minutes and clean the screen.  Which isn't really difficult.  You just pull three pins and it slides right out.  After you practice a few dozen times, you could do it with your eyes closed.  You just have to stop the thing and then get it started again.

After our cornstalk episode we went indoors and Googled the owner's manual (the stickers give adequate instructions to start and run the machine) and the manual says for wet materials to just remove the screen.  Removing the screen allows the shredder to shoot vegetation right through without really chopping it that much.  The screen holds the material back so the flails can chop it finer.  You can get screens with larger holes, and a quick search of eBay found a bar grill instead of a screen.

We've decided that we need to process our compost in smaller batches so we can easily sort through the types of material we want to shred and set the machine up for that.  There are some things that shred beautifully.  Small leafy branches, for instance, contain the right ratio of dry wood to wet leafy greens.  It is wise to keep a few dry sticks around to clean the shredder.

It loves marigolds because of their woody stems.  It's really fun to give it a marigold plant and have it come out in a shower of green, yellow and orange confetti.  Bush bean plants are also a big hit.  Impatiens shred easily but have a high juice content and turn into mush that needs to be cleared from the shoot.  Long stemmy grasses and day lily leaves need to be held back so they don't just shoot through unscathed.  If you have these things in separate piles, you can give the machine the perfect combination to keep things running smoothly.  We kept a few three inch tree limbs for last to clean the flails.


It takes several days (five) to cut down all of our perennials and annuals.  As I said before we have usually just piled the bulk of the waste at the edge of the woods and let it return to nature.  We ended up with a sprawling pile of vegetation to deal with.  There is everything from woody day lily stems to juicy impatients.  This would all compost down eventually, but if you run it through the chipper you not only reduce the volume by at least two thirds (advertised as 10:1, but maybe and maybe not), you also mix the wet with the dry.


Two and a half hours later we had reduced the pile to about a fifth of the volume.  It was a sizable job but gratifying and sort of fun.  Now I will have to turn the pile now and then so it composts down to something useful.  Next time we trim shrubs and tree limbs we won't have to pile them out back for a brush fire.  We can just wheel out the chipper and turn them into mulch.

Some of the material I used right away as mulch.  The cornstalks went straight back into the beds they came from.  I'll leave this until spring and then rake it into the soil.  Right now the consistency is much like grass clippings, forming a thick mat over the soil to block weeds until spring and feed the earth worms. 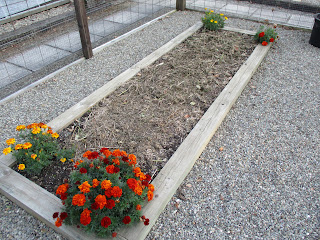 The buckwheat was both stems that were cut a month or more ago and left to dry mixed with green cut that day.   A total of four beds of growth went to the poorest bed which needs the most help. The combination of wet and dry made a nice mulch.

Now the remaining pile of horse manure residing on the Poop-deck will be re-located to somewhere that we can still get to it.  Having acres and acres comes in handy sometimes.  We will probably mix it into one of our older compost/topsoil piles created from sod edgings, green waste and other soil incidents. We use that material for repairing the lawn or starting new landscape beds.  Then we will develop a system for shredding and composting all of our green waste in a tidy and organized fashion.  The gardening system continues to evolve.

Posted by SmartAlex at 7:36 PM