Winding down - or maybe not. 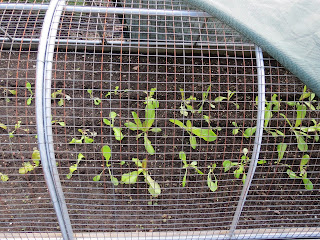 It seems like the garden should be winding down towards the end of this long hot summer.  But its not.  Its still going full tilt.
I have a lot of lettuce going.  Besides these three rows I have three flats of transplants in 4" pots ready to go into containers that can be moved into the cold frame.  But I'm in no hurry for that.  I have many many seedlings I am holding back.  They will not take off until they are removed from their baby pots.  There are many large leaves that I should probably start harvesting. 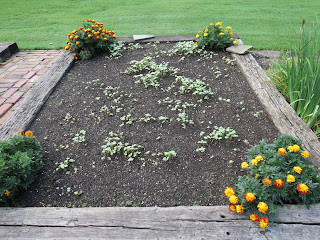 The Pickle Bed is resting.  The Buckwheat is just now coming up. 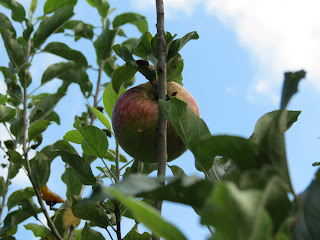 The apples are beginning to ripen 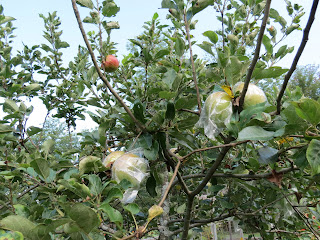 I have about two dozen apples bagged, and a couple I couldn't reach
I loosened up the mulch beneath the tree so any that fall will be salvageable.
So far so good. 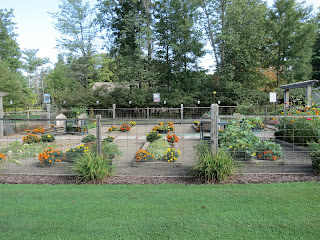 The garden still looks like a pretty busy place. 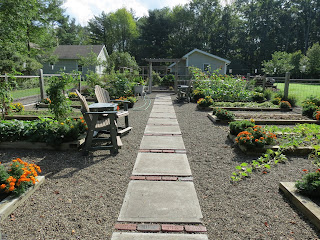 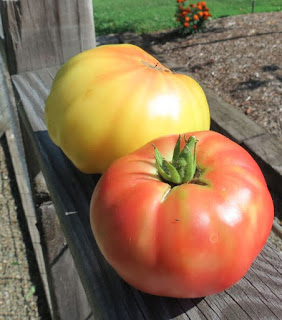 The tomatoes are starting to ripen again 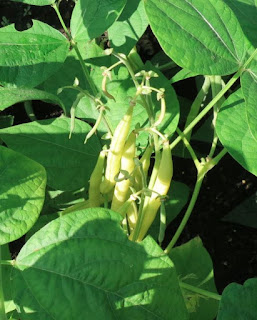 I have more than enough Blue Lake 47 bush beans to use and I have all I want in the freezer.  The late planting of Gold Mine are ready to start picking and freezing.  We will probably have beans until frost.  And so far, I am not getting the pithy, tasteless beans I got last fall. 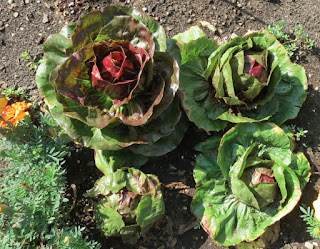 I have "experimental" Radicchio ready to use in salads 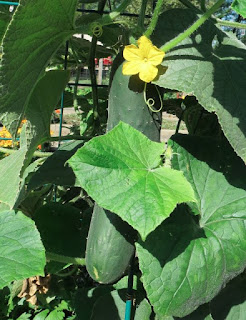 The three remaining cucumber vines from my May seedlings are healthy and producing like crazy.
The second planting in the other bed are also producing well but the vines are suddenly and quickly succumbing to disease.  Despite my frustrations, this has been the longest cucumber season yet. 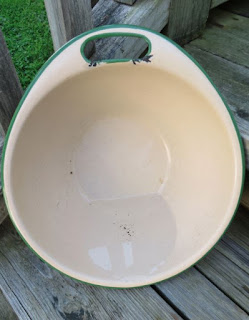 Now let's stop for a moment to contemplate "fresh rain".
This summer we have been leaving a white Corelle bowl of water out for the neighborhood cat.  We began to notice that every time it rained it would be full of dirt and sediment and need a good washing.  Where was all of this dirt coming from?  Only on rainy days. Well, obviously the rain.
Not only do I see its effects on the apples ...

But every year I get to scrub it off of the house.  The worst is the outside of the white rain gutters and aluminum fascia underneath which will be black with grime and require SoftScrub and a sponge.
The white doors all turn grey.  Which is why we painted them brown.
Our house is over 100 feet off of the road, and the garden sheds are over 200 feet off of the road.  There is the gravel driveway to consider, but I only go out and come in once, maybe twice a day. 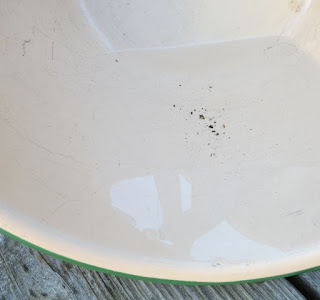 So... obviously, our lovely rain is a major source of grunge.
On Sunday I had gone out to the compost with a bowl of melon rinds.  I rinsed the bowl out in the garden spigot and set it down in the open where I would remember to take it back to the house later.  While I was still outside working we got a cloud burst with less than a quarter inch of rain, and that is how much dirt I got in my recently clean bowl.
Yuck.

A brief illustration of my cover crop/green manure project.  Here are four beds that are in various stages of work.  A few weeks apart.


So that's where we are at the beginning of September.  The weather has not cooled down and right now it is hot (high 80s), heavily humid, with clear blue skies.  This weekend's forecast is 60s and rainy so maybe we can turn off the air conditioner for a few days.  The tomatoes are starting up again.  The cucumbers and bush beans are over-producing.   I have a handful of after-thought potatoes left, and a lot of carrots. We have cantaloupe every day but there are only a few left to pick.  The lettuce is just now pickable.  Apple pie season is just around the corner.

The neighbors are pulling out their garden bit by bit.  This past weekend they pickled 29 pints of beets.