The 2020 gardening season is winding up and its time to look back and summarize what worked and what didn't.  For starters, the year 2020 has gotten a bad rap.  Apparently whatever can go wrong is going wrong, and the gardening world is no exception.  I heard one person lament "if I'd have had to rely on my Covid Survival Garden I would have starved" 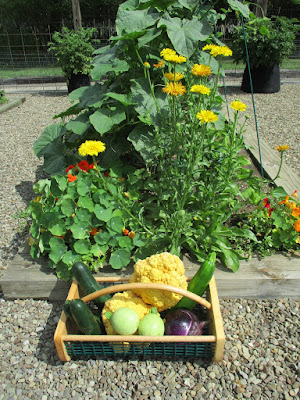 I'm hearing everywhere how challenging the weather has been this year, and honestly, I haven't found this year to be any more challenging than most years.  You know - its always something.  As usual, some things went well and some things fell flat. 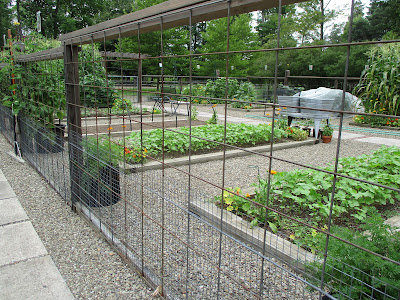 This year, I had my fill of the abundant cauliflower and summer squash but had to wait for ages for any decent beans.  My sweet potatoes were a great success (in my opinion) but the volume of regular potatoes was a disappointment.  Late beans and small potatoes were a theme nationwide.  August was so hot and dry that tomatoes refused to ripen, but that too came to an end.  I don't think I had trouble with anything to the extent that I'd never try it again, but there were a few things I need to practice on some more.

May Weather:  OK, May was a trial.  The first half anyway.  I struggled to keep everything growing through day after day of frost, wind and snow.  It was made worse by the lovely warm end to April which enticed me to optimistically pot up my tomatoes into gallon pots instead of leaving them in the safety of the basement under the grow light, and the fact that I received a pear tree fully leafed out two days before a late snow storm.  The cole crops in their shelters, and the seedlings still in the house did just fine.  The peas, in their eternal wisdom, waited it out, but did just dandy when the weather finally turned.  For several weeks I thought for sure all of the tomato plants were going to die but they recovered and carried on like nothing ever happened.  It was a lot of work taking care of everything, but it was one of those cold snaps which can be overcome by supplies, preparation, hard work and dedication to carrying. everything. in. and out. every. single. day. Without fail. 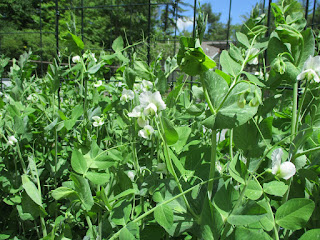 Peas:  Peas did well.  I succession planted them beginning in March, as I always do, which ended up not mattering at all because the weather was so erratic that the early peas stopped growing for weeks on end and then they all agreed at the same time that the weather was perfect and they should get going all at once.  But that's the awesome thing about peas in my growing zone.  They are a very sensible crop.  They deal with a lot of issues on their own.  You put them in the ground as soon as you can and then you wait and let them do their thing.  I'm done experimenting with varieties for awhile. Next year I'm only growing Penelope because they are currently working perfectly for my needs. 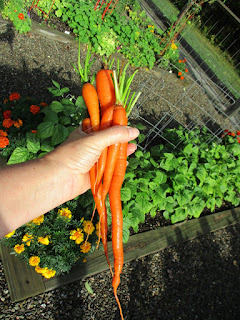 Carrots:  Carrots don't like root pruning grow-bags.  That's an easy and broad assumption to make but I'm taking some responsibility in the meager results.  I didn't water them enough.  And grow bags dry out quickly.  Next year I am putting them underfoot so I will pay more attention.  But I am also putting them back in plastic containers.  My local nursery was thoughtful enough to bring in stacks of good sized, non-decorative, useful growing containers at a price much more reasonable than I can find online and I got two appropriately carrot-sized pots to replace the grow bags.  Grow bags are a great thing to have on hand.  They fold flat to store, and you can use them as a back-up when you run out of space.  But that doesn't mean they are the end all solution to container gardening. 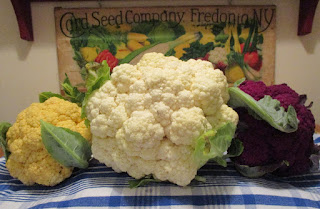 Cauliflower:  I'm feeling quite comfortable with growing cauliflowers now.  They are a long term commitment, starting in March and going into the garden in April, but if you enjoy fresh cauliflower its worth it.  We've discovered a lot of difference in taste across the varieties.  The purple Graffiti were beautiful and fun to grow but had a rather strong taste.  We prefer the yellow Flame Star for its mild, sweet taste, so next year I will probably only grow those.  I have a lot frozen and I plan on trying my hand at some cauliflower cheddar soup.  The key to growing good cauliflower (really all cole crops) is row covering to keep the cabbage moths off. 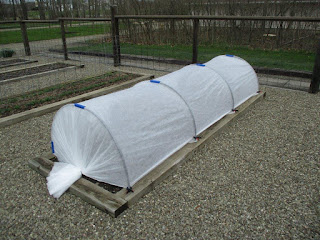 I was quite happy with my row cover solutions and my supplies are ready for next year.  I'm going to start in spring with the heavier GardenQuilt from Gardeners (which held up well tot he weather and clips) and then skip straight to the see-through AgFabric insect netting .  I've purchased the appropriate sizes and labeled them in case I forget what my plan was.

Broccoli: I only planted broccoli as a fill-in but very much enjoyed fresh broccoli and pea salad. So next year I will again buy some transplants but not start seeds. 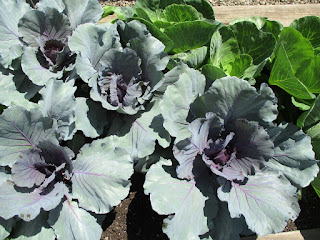 Cabbage: transplants were also an impulse buy because I was in the mood for homemade cole slaw.  Next year I will grow some again.  Not a great quantity, but at least four for fresh slaw.  The cabbages can share a bed with the broccoli since they require the same covering.

Brussels Sprouts:  Talk about a long term project.  They are still in the garden even though we have had one hard frost and I should be picking them now. 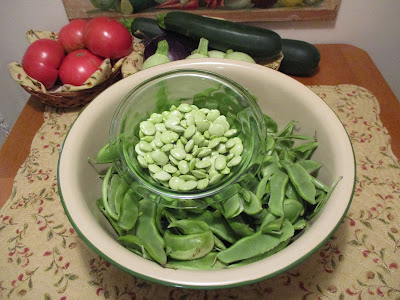 Lima Beans:  Much like the cole slaw, I got a craving for lima beans.  This was my first try for limas. The plants did very well and there were a lot of blooms, and the earliest ones set well but after that most of the blossoms dropped, probably because of the hot dry weather.  In fact, they were still blooming and again setting baby beans when I pulled them out.  The six or so portions I did get were very good so I will try this crop again and see how they perform under different weather conditions. 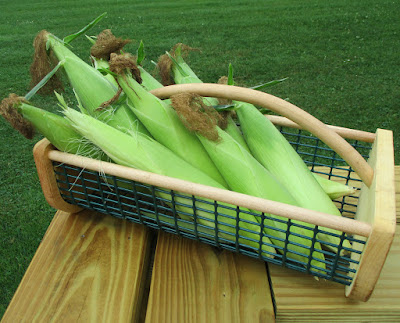 Sweet Corn:  I hadn't grown sweet corn in awhile but this year and last have been so successful that I will probably keep growing at least one bed each year.  The taste is far superior to the best the local farmstand has to offer.  Next year I will drive T-posts at the corners of the bed so I can run a cat's cradle of wires to prevent the stalks from lodging during wet weather. 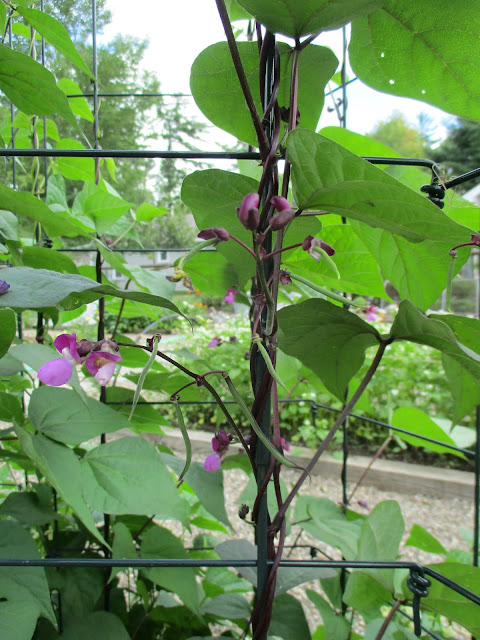 Pole Beans: Good things come to those who wait.  My fourth planting of beans at the end of July was the real success.  I planted two varieties of bush (Jade and Jade II) and two pole (Monte Gusto and Carminat). The yellow Monte Gusto were my favorite.  Awesome variety of long, straight beans.  I have an excess of beans stored away. 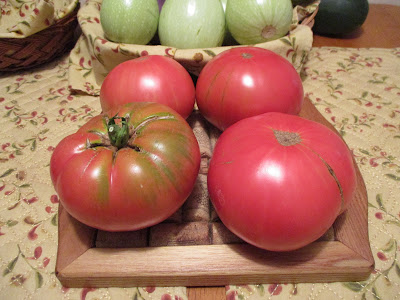 Tomatoes:  I grew too many tomatoes.  Go figure.  I planned to grow three plants.  I ended up growing seven because I was so worried by their early (non)performance.  And that is more than TWICE as many plants as intended.  Must do better next time. 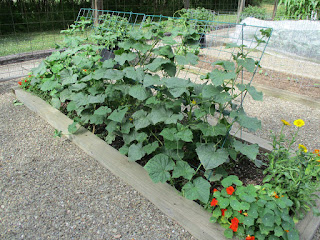 Cucumbers:  I grew too many cucumbers.  Again - I get nervous with germination problems and I start to over plant.  This year I also grew pickling cucumbers because it was a pickle year.  I won't have to plant them next year but I have leftover seeds and will probably plant a few plants because I've found some good pickling packets that you can make one pint of refrigerator pickles at a time.  And I found that to be really fun.  And man - are those pickles SPICY.  They will light you up! And they're very crunchy. 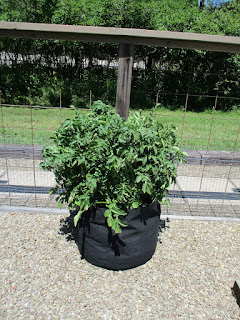 Potatoes:  the plants were more impressive than the harvest, but I still have plenty of spuds stored away. 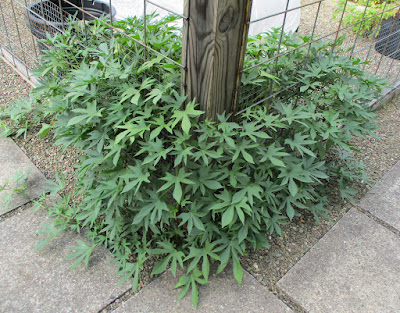 Sweet Potatoes:  What Fun!  These were beautiful plants to watch all season and the tubers were plentiful and just about perfect.  I cured them for two weeks in a sunny window and they are super sweet.  In fact, the first time I prepared them, I roasted them and the instructions suggested that I toss them in oil and brown sugar.  Well - they didn't need the sugar.  I sampled them when they were almost done and pulled the whole batch out, rinsed them in a collander and put them back in the oven.  The next time I prepared them I baked them and we ate them plain. Not even any butter. They had a terrific taste and texture and the skins fell right off onto the plate.  I am working my way through processing them (about 20 #), storing them in the freezer both baked and roasted. 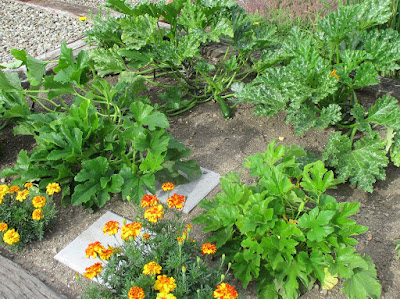 Labels: The Good the Bad and the Ugly