For those of us who enjoy being self sufficient, and farming just a little (or a lot), this article about "Grandpa's Victory Garden" is a wonderfully descriptive story about the sort of garden we would all love to have, and a way of life gone by. My mother's father was a dairy farmer, and my father's father was a teacher and hobby farmer. From them, I lerned to garden on a grand scale. I learned about raising chickens, pigs, cattle, even sheep and rabbits. My upbringing made me skeptical of any food that came wrapped in plastic. I often wonder, as we are now a few more generations removed from living off the land, and the small farmer is an endangered species, how will the next generation learn the skills I learned?

WW2 began in September 1939, and food rationing began in January 1940 just about the time my Grandfather reached retiring age. He had always been a knowledgeable gardener and grown vegetables and fruit for his family. Through frugality and good domestic economy he and my grandmother succeeded in buying a home of their own. Now they carefully planned their personal wartime campaign - a Victory Garden.

They moved to a new house, in the same quiet cul-de-sac where their son, who had been retained in London (England) on essential services, lived with his wife and family. Both houses had very large sunny backyards as well as sizeable front gardens. Only the rear fences, which separated the gardens from a back lane, and the portions of side fence immediately alongside the dwellings were the standard 6 feet in height. The rest of the side fences separating the gardens in the cul-de-sac, and the front fences, were about 3 feet 6 inches high and of an attractive wooden lattice. This allowed maximum light and air to reach the gardens. Before the houses were built in the early 1930's, the land had been used for market gardens, so the soil was excellent. The undeveloped portion of land at the rear of the estate had been divided into allotments, and Grandpa rented one of these. 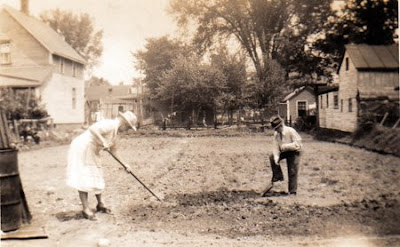 From the summer of 1940, Grandpa brought us produce at least once, sometimes twice a week, which meant a long walk and a bus journey. There were vegetables and fruit in season, a few eggs, and sometimes a dressed (or should I say 'undressed'?) rabbit. But it was only when we were bombed out in 1944 and went to live with Gran and Grandpa that I began to understand the full extent of his 'Victory Garden'.

The next 18 months laid the foundations of my knowledge and lifelong love of sustainable self-reliance. I was nearly seven years old when we first moved there, so I was old enough and interested enough to want to be deeply involved. I was also just the right size for jobs that required an adult to spend long periods bent double! So I learned to weed, sow seeds, plant and transplant seedlings, chit and plant potatoes, and about crop rotation; also to harvest peas, broad and bush beans, brussels sprouts, potatoes, gooseberries, raspberries, strawberries and currants. I also helped with the preparation of food, with jam making, and with preserving. Everything I was not thought old enough or nimble-fingered enough to attempt I watched closely. What I learnt from my extended family during those months remains a treasure beyond price. 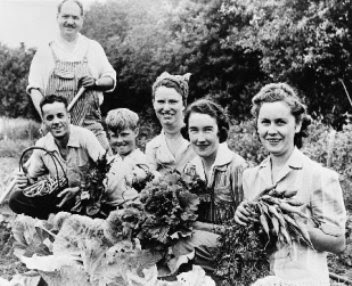 Both gardens had beautifully laid out formal front gardens, with crazy paving paths, bird baths and sundials. There were rose bushes, flowers for cutting, for perfume, and for pleasure. Grandpa had a lavender hedge right at the front, and he was very proud of his bearded irises, which he and Gran called 'flags'. The portion of the back garden immediately behind the house had a small central lawn, with a rockery to the left which gave extra blast cover to the front of the Anderson Shelter. The entrance to the shelter was hidden by trellis and a Paul's Scarlet climbing rose.

In summer marrows grew splendidly on the 2 feet of earth that covered the upper portion of the shelter. To the right of the lawn was the greenhouse, and the greenhouse roof supplied a huge water butt. The mint bed was kept under control by being imprisoned between the greenhouse and the path between it and the lawn. This portion comprised about one third of the back garden. The remainder had deciduous fruit trees scattered throughout, several varieties each of apples and plums, and a greengage.

The people next door had a large pear tree, so Grandpa arranged to swap fruit in season. Early rhubarb had it's special warm spot behind the greenhouse, and behind that was the strawberry bed. The raspberry canes and currant bushes were up near the back fence, as were the compost heaps. The remaining space was used for vegetables of all kinds, according to the season: parsnips, turnips, swedes, carrots, cabbage, brussels sprouts, broccoli, cauliflower, peas, broad, bush and climbing beans. The only thing Grandpa didn't grow was onions. Uncle grew these for both families, while Grandpa grew the potatoes. Uncle also had a greenhouse, and grew cucumbers and lettuce, while Grandpa's was entirely given over to tomatoes. Aunty kept a big herb garden, and she and Uncle also grew vegetables, though they hadn't as much space as we had, because Aunty kept hens for eggs and meat, and raised her own chicks. But they had two cherry trees, and a crabapple. 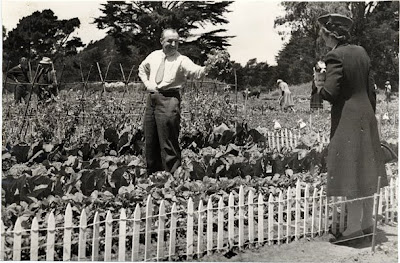 In a lean-to at the side of their house was a wall stacked with rabbit hutches. These rabbits were not kept just for meat. My Aunt had beeen a milliner, and she cured the skins and made gloves, hats and scarves from the fur.

On the allotment were gooseberries, more potatoes, summer rhubarb, and more vegetables. Surprisingly there was little pilfering from the allotment - maybe because it was immediately across the lane from Uncle's back gate, or could people really have believed, as some of my school-mates claimed, that Gran was a witch?! Certainly they asked me often if it were true - their families couldn't work out why Grandpa's gardens were so productive. But I knew it wasn't due to magic, but to knowledge, skill, and hard work.

You couldn't buy artificial fertilisers in those days. But Grandpa kept his plants well-nourished. He swept our chimneys himself and kept the soot for the garden, and he collected lime mortar from bomb sites. Any wood ash was carefully kept, also the lawn mowings, and of course he had the manure and old bedding from the chook and rabbit pens. He made a small wooden cart which he pulled behind his bicycle. He rode round behind the baker, the milkman and the coalman, all of whom made their deliveries by horse and cart, collecting the droppings. Of course the local kids called out after him in the street, and teased me about my 'dirty Grandpa'. But he ignored them, and I learnt to do the same. He collected leaf-mould in the Autumn to add to the compost pile, which regularly received every scrap of organic waste he could garner. Bones were broken up with a hammer, (but not before they had spent hours in Gran's stockpot) and fish bones cut up with old scissors. The vacuum cleaner and the dustpans were always emptied on the heap, as were the teapot and the chamberpots we used at night. All tiny scraps of wool, thread and fabric also went in.

One job I really enjoyed was collecting dandelions and other suitable plants for the chickens and rabbits. Even in winter, I often managed to get a handful or two on my way home from school, and fossicking in the back lane. Grandpa sometimes took me out down to the river, or to the watermeads, where we would gather watercress, and greens for the livestock, and he taught me to identify every plant, shrub and tree we encountered, and told me how to use them. 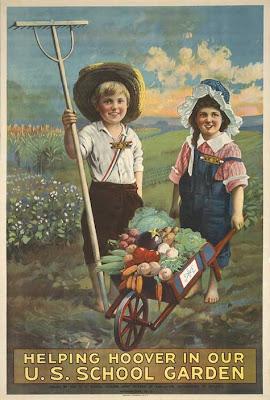 We bottled all the fruit that we couldn't eat fresh or stewed, using plain water, or a little Golden Syrup or honey when we could get it. Sugar was rationed, but extra sugar was available in the summer for jam making, and we made enough to last the year, mainly from the plums, blackcurrants and gooseberries. But we made just a few pots of greengage, strawberry, raspberry, rhubarb and apple, wild blackberry and apple, and redcurrant jelly, to keep for Christmas, and for gifts. Any windfall or damaged fruit, and the green tomatoes left at the end of the season, were used for chutney, using onions, treacle and vinegar, and just a sprinkling of the spices kept carefully sealed and used sparingly since before the war. These spices also went into the Christmas puddings and cakes, which consisted mainly of apples, carrots, prunes, suet, and treacle, with eggs and flour. But they tasted fine to me!

Potatoes and root vegetables were dug as late in the year as possible and then stored in clamps on the surface of the soil. Parsnips and Brussels Sprouts were left until after the first frosts, because the frost sweetened them. Any surplus peas were dried, and the runner beans sliced and salted down in a huge crock. The Cox's Orange Pippins (a variety of apple, now sadly seldom grown) would keep at least until Christmas, if picked just before fully ripe and placed in shallow boxes and stored in the loft. The Bramley's Seedlings, a huge tart green cooking apple, also kept well, and were used in winter for pies and my favourite dessert - baked apple!
Altogether the produce from the Victory Garden supplied 6 families from the summer of 1941 onwards - my Uncle's family, Grandma and Grandpa, our family, my aunt's sister's family, and my other grandparents (they had no garden) and another elderly couple who lived nearby. All of these families saved every scrap that wasn't eaten, and gave it to Aunty. Anything suitable was cooked, minced and mixed with the hot bran mash fed to the chickens and the rabbits, and everything else went into the compost heaps.

It was only much later in life that I realised just how wisely Grandpa had planned for those he loved. He died in April 1945, in the room next to the one in which I was sleeping, from cancer. As was the custom, he was laid in a open coffin in the back room umtil the funeral. When he died, his beloved 'flags' were still in bud. But as the closed coffin was at last carried to the hearse, Gran was able to lay a huge sheaf of the fully open bronze and purple blooms upon it.

For two days late in March 1945, Grandpa had kept me out in the garden, planting the whole of one side with potatoes. Although food shortages became worse that year, even after the end of the war, Grandpa had seen to it that we had enough potatoes to keep us going until the following spring. For Grandpa work was truly "Love made visible!" 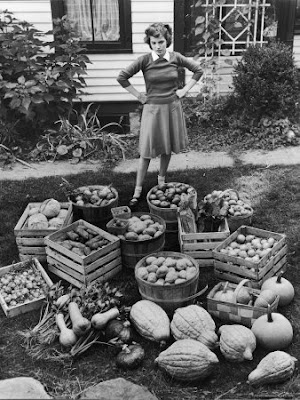 Posted by SmartAlex at 8:36 AM