My love affair with seed packets dates back to my childhood. I grew up in a greenhouse. Our little house was attached to one end of the main house, and our front yard was benches of geraniums, and hanging fuscia baskets. It was one of several beautiful old glass houses. The concrete in one of the additions was dated 1923. In this added on house, the overhead furnace was just under head height, and to keep the customers from walking under it and braining themselves, my Dad placed the seed display right below. The colorful seed packets with their musical maraca contents held me transfixed. I would shake each one listening to the different sounds. The scritch scratch of tiny carrot seeds right down to the bass rumble of the sweet corn in its deck of card sized box. My mother dressed me in Osh Kosh overalls, and I often had a seed packet in the pocket of my bibs. 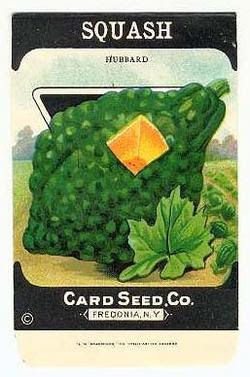 When I began gardening in adulthood, I found I was drawn again and again to the colorful seed displays at the various stores. There were so many packets I wanted without actually wishing to grow the contents. This led me to search for collectible vintage packets. 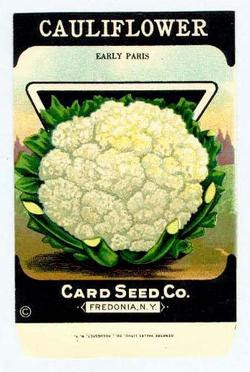 Oddly enough, the most plentiful packets on the market were from a seed company in nearby Fredonia NY where I went to college. These pictured here are unused packets that flood the market. You will see their image in pop art, and even on Christmas ornaments. There are about 78 different varieties from Card Seed available, but I have only collected about 30 to use as decoration, and just for fun. I have also collected a couple from another local seed company. The unused black border Card packets from the 1920s are so plentiful because when they were printed, they were almost identical to a competitor's packets (the printing company ought to have known this was a no no) so they were never used, and just packed away storage only to surface later in a local garage sale. 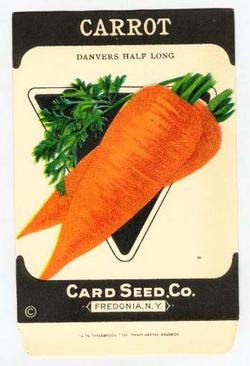 The variety of seed packets available can keep a collector's mind happily occupied during the winter months as we dream of the seed orders to come in the spring. You might even want to begin collecting modern seed packets. Many companies ship through the mail in plain packets, but Renee's seeds have beautiful artwork on them. The seeds carried at Tractor Supply ( I forget which company now) also has lovely vintage art. 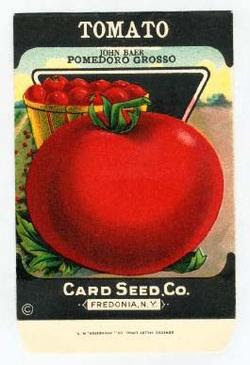 The following article on collecting seed packets is clipped from the Labelman website. http://www.thelabelman.com/antique_seed_packet.php
The Labelman is someone I've had the great pleasure to do business with. Both my kitchen and my sister's kitchen are decorated with framed crate labels I purchased from him, and my 1924 Hoosier cabinet sports tin cans with original vintage labels glued on. In fact, when I told him I was looking for A&P or Glendora labels from the 1920-1930s, he searched his stock, found 3 or 4 not listed on his website, and added them to my order for free. If anyone is interested in decorating with, or collecting crate or can labels, he comes very very highly recommended.
ANTIQUE SEED PACKETS
INTRODUCTION
Antique seed packets are wonderful little works of art for decorating and interesting colorful items for collecting. Though not large, there is a collector base for antique seed packets. Of the antique seed packets available you will find two predominate companies, Burt's seed packets and Card Seed Company. It is very difficult to find antique seed packets from popular companies like Burpee or Ferry Seed.
When collecting antique seed packets you will often find the same exact image is used on different company's packets. The reason being is that a few large lithograph companies would print these with just the image of the flower or vegetable and later print the company name as the packets were ordered. This is very noticeable on 1930-1950's period seed packets, Schmidt Lithography company was the major printer of seed packets during that time. Of the very early printers of antique seed packets you will find Genesse Valley Lithograph Co. who printed many of the Burts seed packets.
BURT'S SEED PACKETS
Burt's seed packets are probably the most sought after of the antique seed packets that are fairly available. From what I have heard the company had a very large left over inventory and decided to sell them sometime in the 1960's. They ran an ad in the Antique Trader and collectors, decorators and dealers grabbed them up. These seed packets date from the 1910's. Burt's seed packets were found in 4 sizes, three of which I have available, the larger collection packages have become tough to find. You'll also find some very early stock seed packets (no company name), which were printed by Genesse Valley and probably turned up in the Burt's seed packets find. Below are some examples of Burt's seed packets.

CARD SEED CO.
The Card Seed Co. packets turned up sometime in the 1970's. The story I've heard is the company went out business in the 1920's and all the old packets, store displays and posters were sealed up in an old building to be discovered 50 years later.
Card Seed Co. packets can be found in four different sizes and a variety of styles. The most popular one is the Card Seed Co. vegetable with the black border and vegetable over a black triangle, with row crops in background. These date from the 1920's. There are also a couple flower packets from that period, but these are not seen often. Genesee Valley Litho also printed these. Of the earlier Card Seed Co. packets there is a primitively printed off white packet, also a couple similar flower ones which are smaller. There is also a series of Card Seed Co. packets from the 1900's with some nice color and background. These were printed by Stecher Litho Co. and Dunston of Dunkirk. Below are some examples of Card Seed Co. antique seed packets.

SCHMIDT LITHO CO SEED PACKETS
The majority of seed packets you will find from the 1930-1950's were printed by Schmidt Litho Co. Below are some examples, note Roudabush Seed Store and F. Lagomarsino & Sons use the same moon flower packet. Each packet has a number at the bottom, the highest I have found is over 2900. I assume there were at least 2900 different designs used.

1918 SERIES SEED PACKETS
We've run out of what I like to call the 1918 series, but I did want to mention them and below show a few examples. I refer to these antique seed packets as the 1918 series since most have a copyright of 1918 on the lower left. Note the two companies shown are Huth Seed and Roudabush. This series is a typical stock seed packet with each being numbered and used by a variety of seed companies.

Posted by SmartAlex at 6:27 PM