I thought it might be a good time to pause and discuss the topic of my blog title "Too Many Tomatoes". Can anyone really have too many tomatoes? Yup.

I have always loved tomatoes. Everything about them. I love the Song "Home Grown Tomatoes", the movie (and the book and the dish) "Fried Green Tomatoes" Mmmmm Yum. I have heirloom tomato ornaments on my Christmas tree, tomatoes on my gardening gloves, and tomato art here and there in my kitchen. I love tomatoes.

So, where does this love of all things tomato come from? I guess it is my passion for heirloom tomatoes, and that has to come from my PaPaw. My PaPaw lived in Shelbyville Kentucky. He was a shop and math teacher by trade, and a gardener by ambition. What started as a summer hobby, grew into a thriving business. One of my favorite memories is the smell of his tomato hot house. Yes, he grew so many tomatoes, he needed a separate greenhouse for them. In fact, he developed his own heirloom tomatoes. The story goes like this... 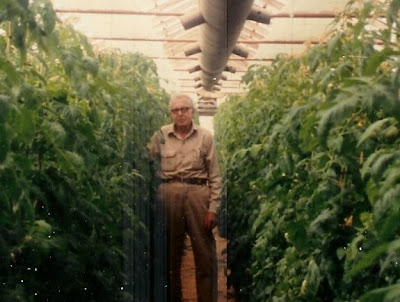 As he told it, this began after WWII. A friend of his came to him and gave him some tomato seeds. The friend said he had smuggled them home from Japan, and that these were the from best tomato he had ever tasted, and he knew PaPaw could do something with them.
So he planted the seeds. A month later, he had a dozen of the scraggliest, yellow, weedy tomato vines he had ever seen, and at the end of the summer, he had a couple decent tomatoes. He saved seeds from the best of these, to plant next year, and so on. Soon he had some “pretty good tomatoes”. These “Jap” tomatoes as he called them, were the main crop in his produce business. 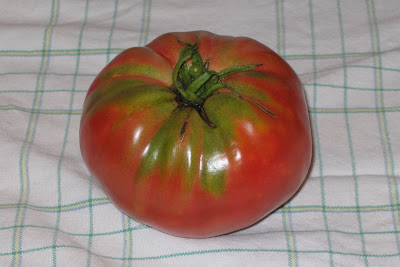 They are a potato leafed, pink tomato, and he was right, the plants start out as the scraggliest things you've ever seen. But they improve. The tomatoes often have green shoulders, and they are thin skinned and fussy, but they truly are the best tasting tomato I've ever had.

So anyway, when I got a little land, I felt compelled to plant some heirloom tomatoes. It started with a few of the Japs, and expanded to up to 16 varieties in every color of the rainbow. Now my husband doesn't particularly like tomatoes (I cut up small ones and hide them in his salad), and my mother and father each have their own gardens (complete with Jap tomatoes). I can only eat about one or two tomatoes a day, so with 16 plants, my dining room table, on any given day from August through September, looks like this. 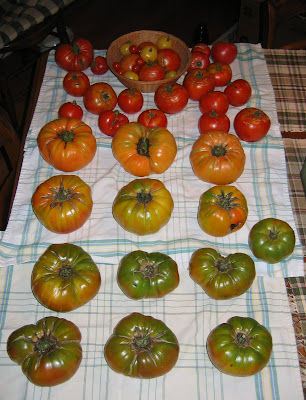 See how they stretch off into the distance? THAT is Too Many Tomatoes for one person. And this is what they look like canned... 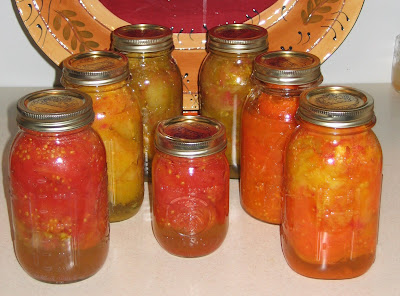 I carefully packed them by color, green, orange, yellow and red. The photo doesn't do them justice. They were beautiful. But, if you want to doubt your culinary abilities, try making goulash with a jar of green tomatoes... and have a couple of jars of tomato paste handy, 'cause it ain't gonna be purty.

Now, that might not look like too many tomatoes to you, but keep in mind, the larger ones each weighed close to 2 pounds each. 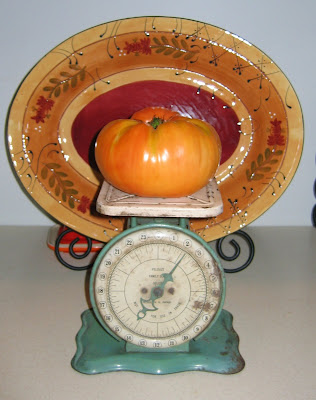 Before I resort to canning, I start with the food that fuels my passion... tomato sandwiches. I eat a couple of tomato sandwiches a day, or at least I did until I got to Friday, and realised I had also consumed a loaf of bread and half a jar of mayonnaise.

So, I started to can. Canning is a learned talent. A lot can go wrong in a short period of time. Usually, I just do one or two quarts at a time, as the tomatoes build up. If I have a whole bunch, I fire up the turkey frier, and do them outside. It is hard to find canning supplies in my town. I was making do with a jar lifter from the early 1920s, that I bought to stock my 1933 Hoosier kitchen. It will work in a pinch. 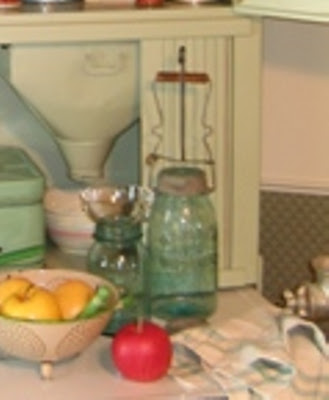 One evening, I was lifting a jar out of the stock pot with this antiquated instrument. As the jar tapped the edge of the pot, I knew I was in trouble. The jar lifter failed, and then in slow motion, I watched the jar hit the stock pot, turn over, hit the stove top, flip, hit the stove handle, bouncing, end over end as the darn jar top unscrewed itself in mid air, and the whole mess landed SPLAT on the kitchen rug. There are a few things you have to condition yourself not to grab... falling irons, slipped knives, toppling jars of boiling tomatoes. I jumped back a safe distance to watch the carnage unfold.

Following the deluge of profanity, my husband inquired what had happened, and I shut him in the bedroom while I cleaned up. I found tomato bits on the walls, under the handle of the stove, the side of the fridge and other odd places for at least three months. Sometimes you just have to sit on your kitchen floor and look at things from a different perspective, and you will find stuff you spilled last summer.

The foot note to all this, and I am not rearranging events for the purpose of story telling... about an hour later, a friend of ours called and said he had been canning, and had taken a trip to the hardware store in Amish country looking for jar lifters since they seemed to have all disappeared around their house. He had ordered some extra, and would I like him to bring me one? "Funny you should ask, I wish you had called earlier. Because, this week, I happened to have Too Many Tomatoes...."

Posted by SmartAlex at 4:25 PM