Why do we garden?

Has anyone noticed that the world has gotten smaller? As recent as yesterday I perused the produce section of the grocery hoping for one more pomegranate before the season was over. And this morning I treated myself to a banana. Bananas and pomegranates don't grow in western NY. In fact, in February, NOTHING grows in western NY. I am still eating potatoes and onions grown in my garden and tucked away in the cool basement, the supply of frozen green beans is holding up nicely, and I still have a couple of jars of canned tomatoes. I try to eat locally. I binge on peaches in the peach season. I snack on berries off the bushes along the woods. I anxiously await the first shoots of asparagus. It keeps me in touch with my environment, and the rhythm of the seasons. Think about that the next time you indulge in some out of season fruit which just traveled 1500 miles from some third world country to make it's appearance in your kitchen. How much do you think it had to spend on gas to do that? And what environment was it grown in? No telling. 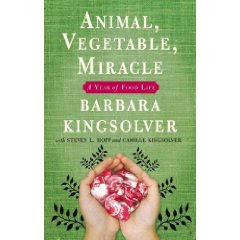 I never really truly appreciated the impact of our food choices on the environment until I read Barbara Kingsolver's book Animal, Vegetable, Miracle: A Year of Food Life . In it she conducts an experiment, limiting her family to foods grown within a one hundred mile radius for one year. It's doable and it will make you rethink your diet. It made me want to raise turkeys! And, it landed Barbara Kingsolver in the number 74 spot of Bernard Goldberg's 100 People Who Are Screwing Up America ! Heaven forbid we question the elaborate money making scheme of food control before we destroy our environment and ourselves in the process. 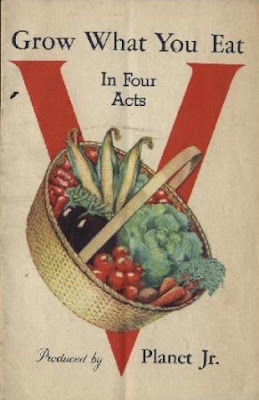 I think it is high time Americans remembered how to feed themselves and become more self sufficient, or one of these days, a whole buncha them gonna starve to death. Which is why I signed the petition to Bring Back the Victory Garden. What is a Victory Garden? You mean besides a fun little show on PBS? During World War I and World War II, the United States government asked its citizens to plant gardens in order to support the war effort. Millions of people planted gardens. In 1943, Americans planted over 20 million Victory Gardens, and the harvest accounted for nearly a third of all the vegetables consumed in the country that year. Emphasis was placed on making gardening a family or community effort -- not a drudgery, but a pastime, and a national duty. read more here. 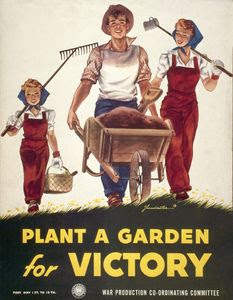 So that is why I garden. To protect the environment... To preserve the diversity of our food source... To control the quality and nutritiousness of what I eat... To remember where I came from and my intimate connection to the earth. Save the world, one garden at a time.

Posted by SmartAlex at 9:50 AM