Spring is always a suspenseful time as I go around the yard looking to see what did or didn't survive the winter.

First, it looks like we've lost a few perennials. Only one of a matched set of lupines emerged. One of the guara, which tried to die last year has yet to show any signs of life, while the other two clumps are fine. I'm reserving judgement on everything else. It's a bit early to pronounce the baloon flowers dead, but the bleeding hearts really should all be up by now. I have a list, and I keep making the rounds every couple of days. I've already stopped by the nursery, but have contained myself. I did buy some pansies.

The trees seem to be OK. The row of lindens we planted last year are ready to leaf out. The mulberry trees which an early snow nearly laid flat are leafing out. We staked the one that suffered the worst, and I stop by nightly to give it words of encouragement. And my apple trees are doing great! These are the ones from Big Horse Creek. Last March I was out salvaging some scions from the dying tree in the edge of our yard. I sent them of to BHC, and in November they sent me two grafted saplings. We planted them, put tree tubes around them and hoped they would survive the winter. Last week they rewarded our expectations by leafing out heartily. This is what they look like down the tube. 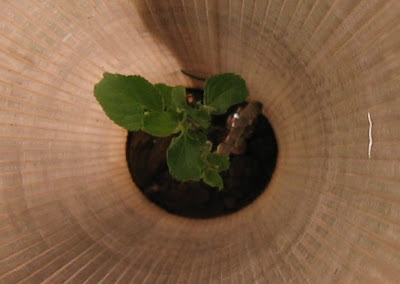 And lastly, my asparagus is finally up! This is year three for the bed. It is in a less than ideal spot, and has been rather poorly treated. Last year, the sprouts were about the diameter of a pencil lead. This year they are almost normal sized. There were two stalks up at once giving me... a third of one serving. I hesitated to pick them, but I found some more stalks poking through , so I went ahead and picked them. It doesn't take much work to prepare two asparagus stalks! But that was the best asparagus I've ever had. I am planning another asparagus bed in another location, which I hope will be more productive. 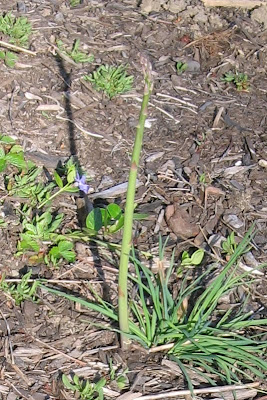 Posted by SmartAlex at 4:01 PM