While Tim was digging for the drainage line from the downspouts to the water storage tank, he was unlucky enough to have aimed his line directly through the middle of this stump. 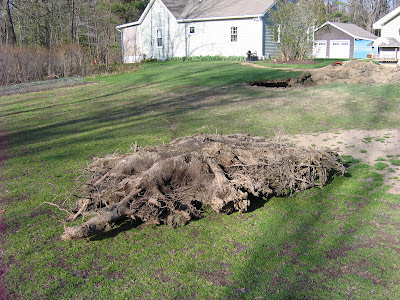 So he had to remove it, leaving a large, gaping, two foot deep hole full of water in the midst of the drainage project. 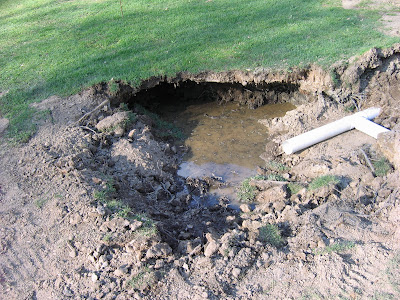 Now this was no surprise. We've had dealings with this stump before, and we knew it was lurking here somewhere. We just hoped we were headed narrowly past it, not through the middle of it. And, it broke the tractor... again. Here's the back story. Along the edge of where the chicken run will be, between there and the garden site, there used to be a double row of over a dozen very large hemlocks. The first row was cut before we bought the house. 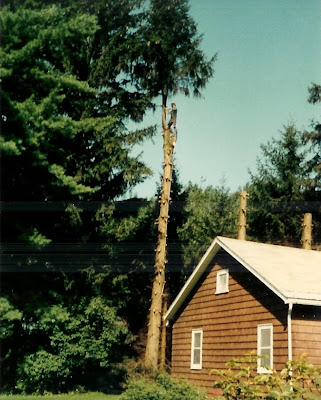 The second row was cut early in our renovations. There were 8 left at that time, and the top fell out of one, narrowly missing the house. So we called a tree service to come and remove the monstrosities. This left us with 6 stumps in the yard, and 2 in the over grown edge where the blackberry patch is. Tim turned the stumps in the yard over and buried them where they sat. In our defense, we did not intend to live in the house. We planned on having it as a rental. We certainly didn't plan on gardening over those stumps. And he said at the time he would probably live to regret it. But, they were too heavy to move. This particular stump tore the metal attachment the neighbor fabricated that bolts to the tractor bucket and provides a handy attachment for a tow chain. TORE the metal. Which exactly what it did this time too. But what do you do with 6 very large stumps that you can't move? I guess the question is what do you do with 1 very large stump you can't move, because that's where we are right now. I guess it's going back into the back woods to provide a home for furry chipmunks or something, but it's going to have to be pushed there, because it has made it's feelings known about being hung from a chain. 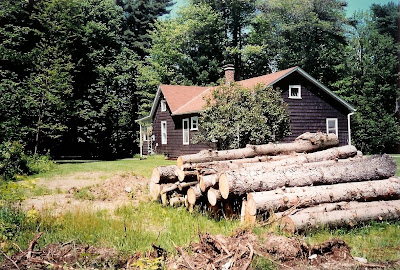 So, back to the drainage project. We have the downspouts from the coop and garden shed, as well as the back half of the house routed through here to the storage tank. That will provide a lot of free rainwater for watering the garden. 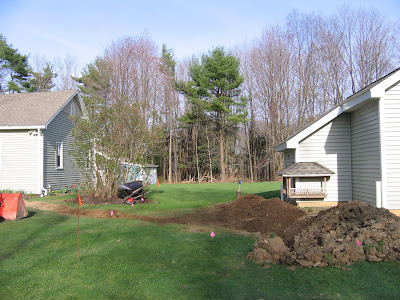 The tank has been sprayed with undercoating and is ready to go in the ground. See how it is hanging from the tow chain attached to the inside of the bucket? One of those attachments is what the stump tore. It didn't break the bolts, it tore the darn metal. Heavy metal. Can you tell we're annoyed? And sort of impressed. Anyone want a stump? You have to pick it up yourself. We won't deliver. 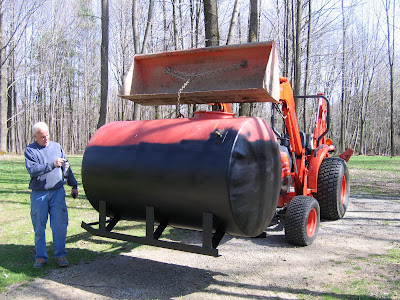 Posted by SmartAlex at 6:44 PM