Raised Beds - the half laps

Thursday my husband Tim and neighbor Mike spent cutting the end pieces for the beds, and half lapping them. Here they are stickered and weighted to keep them from twisting with the changing spring weather. That's 48 half laps for the end pieces. 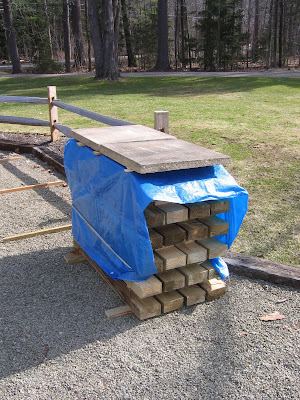 Friday the three of us did the sides. We had perfect weather. Eighty plus degrees, and a nice breeze. Even though we ordered a new batch of ties, what we got were some that had been in the back of the lumber yard, under a pile of snow. The ones in the center were wet and frozen solid. They've been sitting for almost a week here as we waited for them to thaw and dry. The dry ones were about a hundred pounds. Some of the wet ones were probably between 180 and 200 a piece. And we had to move each one 4 times, and spin them three times. Fun. I did my share of lifting and carrying, and I woke up with only one stiff bicep. I guess I'm in better shape than I thought! 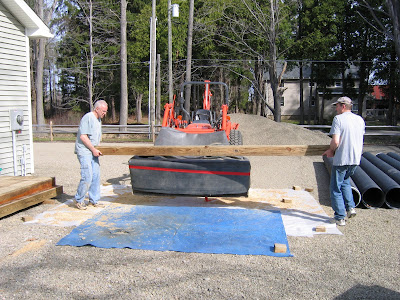 First Tim marked them and took most of the wood out with a chain saw. Two cuts per end. Times 24, equals 48 ends. 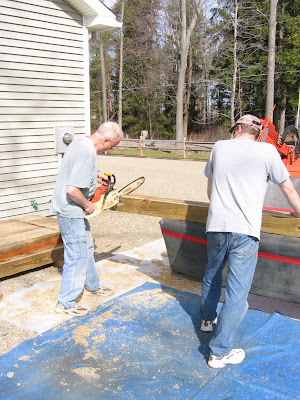 Cut down, then spin and cut from the other direction. 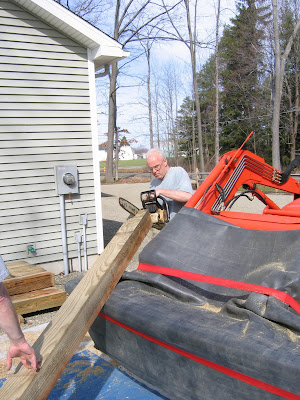 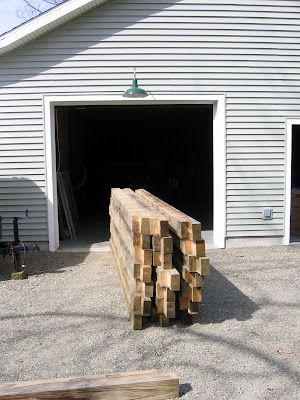 Then we moved them into the garage where Tim used a dato blade and radial arm saw to clean the corner and smooth away the last quarter inch of wood. That poor saw! We almost stopped it at least half a dozen times, but it held up, and everyone came away with all their fingers and toes! 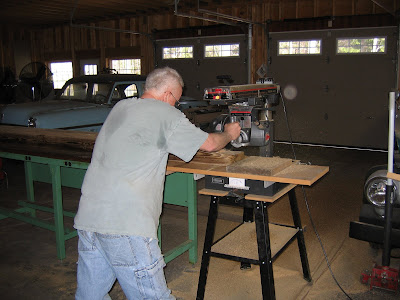 Now the second "done" pile has grown. We stickered and weighted the long pieces, and covered them with a rubber membrane since it is supposed to rain all this week again. 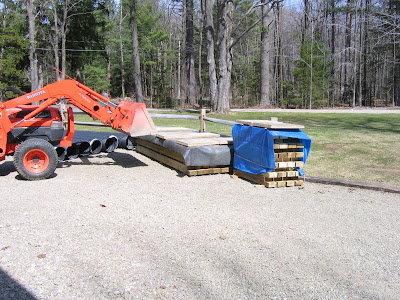 This is the waste from the two stacks of half laps. 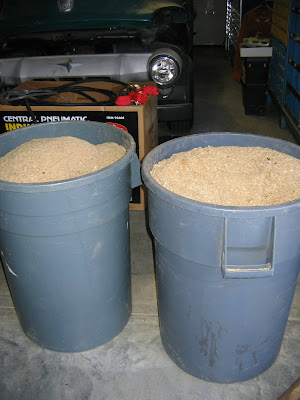 I was thinking if the 6" bed was not deep enough, that someday I could add another layer. But I can tell you now. That is never ever ever going to happen! I had decided that about half way through the 5 hours of lugging 100+ pound ties. My husband voiced it at the end. He's never ever ever going through this again! He did get through it pretty quickly though. And we only had to remind him twice that he wasn't building fine cabinetry. He had suggested that as a "safe word" phrase before we started. Since my husband is a perfectionist, most projects require a "safe word" to keep things in perspective. Heck, some projects require a whole committee to keep him from going overboard!
Besides the ties, we also have gates reacdy to go. I didn't think to get a picture, but the neighbor fabricated them from mtal and a piece of cattle panel. They look really nice and are a vast improvement over the plastic snow fence gate I've had for the past 3 or 4 years!
Posted by SmartAlex at 8:43 PM