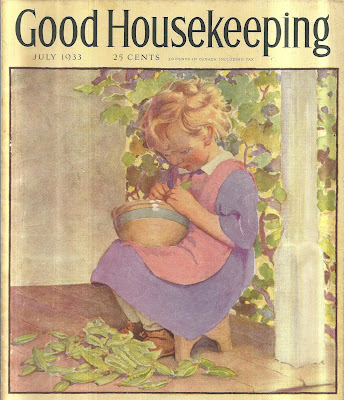 Peas are one of my most favorite garden crops. Not only are fresh peas so superior to canned, or even frozen peas, but I love the flowers and even the chore of shelling them. Tim once offered to help me shell peas, and afterwards declared the crop "too much work for too little food". But I love peas. 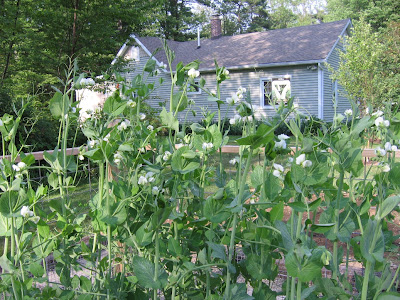 All week I have sat in my office and had, in the back of my mind, lush rows of peas, full of flowers, the pods dangling within temptations reach. Of course I would always rather be outside than stuck in my office, but I just can't get enough of looking at my peas. 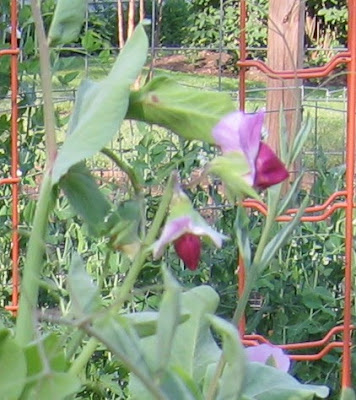 This year I am growing 6 different kinds of peas. I have Survivor, a low growing "leafless" variety which has many tendrils in place of leaves, Maestro, which matured earliest, Wando, which I saved from the last of a fall crop in 2007, some sugar snap peas, and both a tall and bush variety of blue podded peas. The flowers on these are wonderful, ranging from pink to blue to lavender and purple. 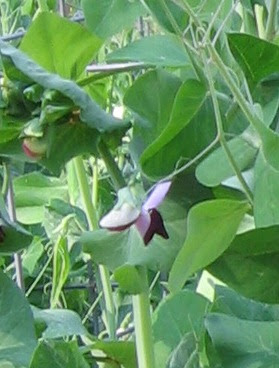 The pods are truly bright blue, but you will have to wait until they mature more to see some pictures. 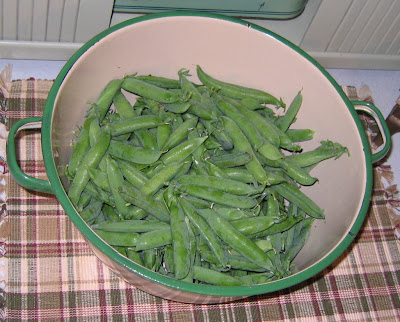 Today's harvest of peas, mostly Maestro. They took almost half an hour to shell, and were reduced to .... 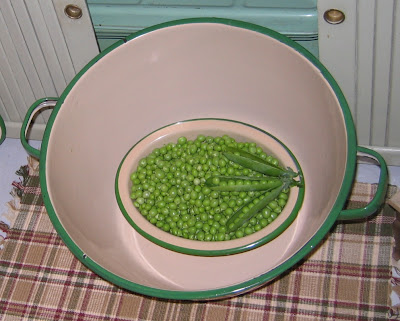 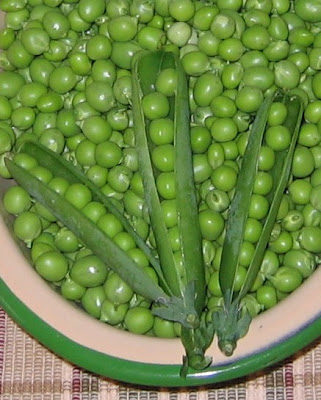 I love popping open the a perfect, even row of peas.


• Peapods are botanically a fruit, since they contain seeds developed from the ovary of a (pea) flower. However, peas are considered to be a vegetable in cooking. More specifically, they are a legume.
• The wild pea is restricted to the Mediterranean basin and the Near East. The earliest archaeological finds of peas come from Neolithic Syria, Turkey and Jordan. In Egypt, early finds date from ca. 4800–4400 BC in the Nile delta area, and from ca. 3800–3600 BC in Upper Egypt.
• In early times, peas were grown mostly for their dry seeds. In modern times, however, peas are usually boiled or steamed.
• The pea is only green when eaten because it is picked when still immature. A ripe pea is more yellow in color. Eating peas when they are green became fashionable in the 1600s and 1700s but was described by the French as "madness".
• Thomas Jefferson grew more than 30 cultivars of peas on his estate.
• Just one serving of garden peas contains as much vitamin C as two large apples, more fiber than a slice of whole grain bread and more thiamine than a pint of whole milk.
• Peas are said to give relief to ulcer pains in the stomach because they help 'use up' stomach acids.
• A 100-calorie serving of peas (three quarters of a cup) contains more protein than a whole egg or tablespoon of peanut butter.
• In the mid-19th century Austrian scientist Gregor Mendel observed the pea pod leading him to create his principle of Mendelian genetics, the foundation of modern genetics.

The garden is growing like mad, and the recent rains have caused an amazing growth spurt. Soon I will be eating summer squash, and the beans are beginning to flower. I even have some pretty good sized tomatoes and bell peppers. 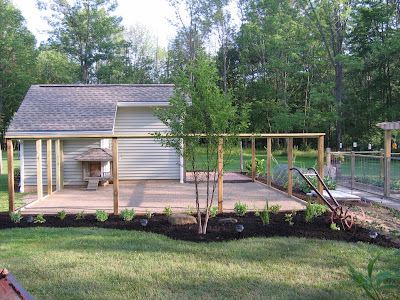 Besides the vegetable garden, we spent last Saturday landscaping in one side of the chicken yard. Only the brick walk to the gate, and surrounding landscaping to go. 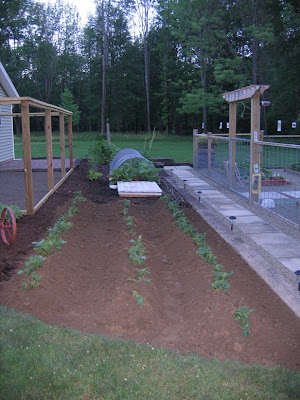 And Thursday night we brought in a lot of dirt and began hilling the potatoes. They were growing at an alarming rate and were at least a foot tall. And it's a good thing we got it done because since that evening, we have had almost 2 inches of rain. There has been some sun, but any picking and tending I've had to do has been in between the rain drops..

Posted by SmartAlex at 5:58 PM