The apples grown from the tree, which I sent away to be grafted in 2009, which I hand pollinated, and waited for Four and a Half Year to sample, are finally ripe for the picking.  Today when I went out to check, one of the apples was lying on the ground undamaged and unmolested.  I picked the other remaining apple. 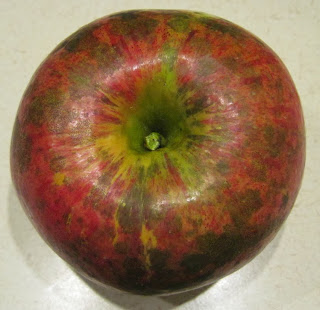 A few weeks ago, I noticed that a bird had bit into the third one.  I picked that and found it to be not quite ripe.  I ate it anyway.  I was determined to let the last two ripen all the way. 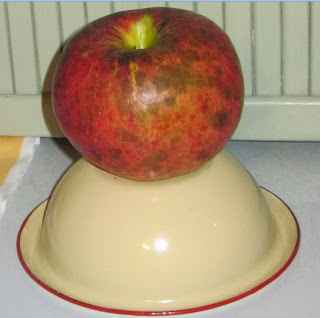 So the question is:  Is it or Is it Not?  An Astrachan that is. 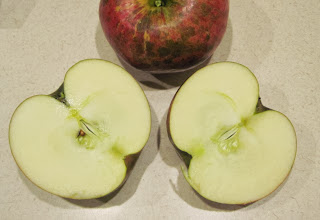 Had I believed my elderly neighbor, and trusted that we were speaking of the same tree, and that she had good information to begin with, I would have simply ordered an Astrachan sapling and planted it.  But my faith wavered and instead, I took a graft from the tree and sent it to Big Horse Creek for grafting.  That was in March 2009 and  November 2009 they sent back two grafted saplings.


So let's examine the facts.  The Red Astrachan is a Russian variety described as such "Fruit medium sized and distinctly lobed in appearance. The thin, pale yellow skin in nearly covered with bright red and crimson splashes and stripes. White flesh is often tinged with red streaks and is coarse, crisp, moderately juicy and briskly subacid in flavor. Ripens late June to early July, depending on location." Well, maybe and maybe not.  It looks close enough to some of the pictures I'm finding on the web.


But, here is how I would describe this apple. "Fruit medium sized Very Large and distinctly lobed in appearance. The thin, pale yellow skin in nearly covered with bright red and crimson splashes and stripes (agreed). White flesh is often tinged with red streaks and is coarse, crisp, moderately juicy and briskly subacid in flavor (agreed). Ripens late June to early July, depending on location . Late September" I've also seen estimates for August, but this is NOT an early variety.  Even the original tree.  Tim would climb it to get the few apples from it in late Sept/early October when we were picking our Cortlands.  But I have no clear memory and no photos of those apple's appearance.

Now, the Very Large could be explained by the fact that only three apples grew on this tree.  Selective pruning of fruit does promote larger fruit.  However, no one is ever going to tell me that this is an early apple.

Does it matter if I know what variety it is?  Sort of.  But most importantly, it is an apple that appeals to Tim and I.  We both like hard apples, and we both agree that these have a good taste.  Secondly, it is a child of the last of those old trees which made up the orchard that his grandparents and father picked from all those decades ago.  Maybe in my apple eating this fall I will find a variety to compare it to, and thereby narrow it down.  If not, we'll think of a name for it.  Until then, it is simply "our apple".

Now, the next question:  will the other tree produce the same apple?  It did not bear fruit this year.  I sent 3 or 4 scions taken from different parts of the tree.  I don't know if these two trees came from the same scion.  And I don't know if the original tree had a graft or not.  So they could, conceivably, be entirely different apples.  The mystery continues....

Posted by SmartAlex at 7:38 PM