I am so behind in blogging I don't even know where to begin.  It has been a busy gardening season.  Currently, it is pouring rain, Tim is wishing he'd taken the cover off the potatoes, and I'm so tired it didn't even cross my mind.  There is a batch of plums for Wild Plum Jelly simmering on the stove, and a batch of beans just cooling in the freezer.  I have photos still on the camera, blogs in half finished stages, and loads of garden thoughts crowding my mind.

Let's start with the potatoes: 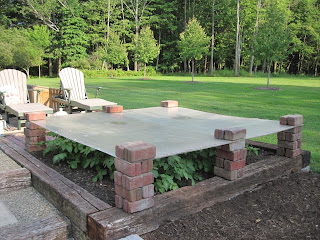 The deer were munching on my second batch of potatoes so we used the greenhouse panels to cover them.  This means I have to water them every couple of days... 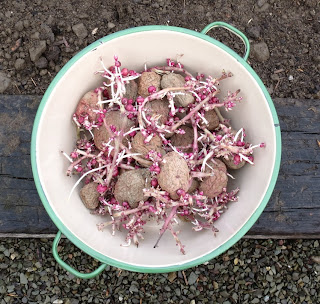 And do you remember these very sprouty potatoes I planted this spring?  I was wondering if they were too far gone to do anything....  perhaps the shock of planting them at this late stage would shock them into rot... 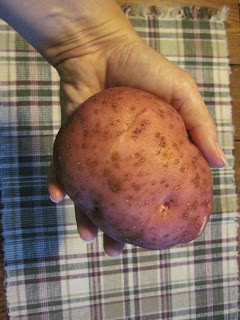 Nope.  We're getting record sized potatoes.  I've been stealing from one row since the end of June, and I'm still about a week away from actually digging them and bringing them in to store.

So, pertinent blog catching up:  August is now over.  We had under 3" of rain.  About 2.75" I believe.  It was very cool, and the bugs were awful.  On the up side, powdery mildew has been late and minimal.  Tomatoes are a bit scarce, and I think the bulk of the harvest is over. 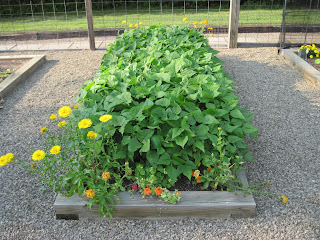 Beans are doing awesome, and the black beans are finally "beaning".  They are thick, luxurious and healthy, but this rain is finally knocking them down.  It will be a race for them to mature and dry before the first frost.  Also, the fall lettuce, both iceberg and leaf is doing well.  The iceberg is huge (started indoors) but is not "berging".  Hmmmm....  It came straight out of an "Iceberg Lettuce" seed packet.  The "Head Lettuce" transplants I planted this spring were very curly and formed heads immediately.
Posted by SmartAlex at 6:34 PM