"They say there is no such thing as an organic apple in the Northeast".  I remember that quote from Bill Alexander's book the $64 Dollar Tomato.  Chapter 4.

The author had fond memories of his father growing perfect organic apples when he was a child, and his first attempts to grow apples using only organic methods of pest control was a disappointment.  After several years of failure, he finally caved in and purchased malathion and the smell of it was familiar.  All those years he remembered his father growing this wonderful healthy produce, turns out Dad had been using chemicals after all!

Since I only have two apple trees and they only produce a few dozen apples, I have found that bagging the apples gets around the chemical problem very nicely.  It prevents insects from laying eggs on them (the origin of those little green worms), it makes them unappetizing to deer and it keeps the airborne/rain borne diseases like Sooty Blotch off of them.  But you have to do it as early in the season as possible.


Bagging makes a huge difference in the appearance of my apples.  Sooty Blotch is my biggest problem.  Sandwich bags prevent it completely!

The first question I get asked when I have visitors to the garden is "what is in the bags?"  My trees are covered in them.  You might think they would be hard to keep on or that they would catch the wind and make the apples more likely to drop but that isn't the case.  Yes, the trees will drop some apples even after thinning.  Depending on growing conditions the tree will drop any fruit it can't support. 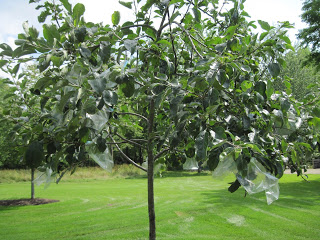 Some people staple on brown paper lunch bags, but I prefer the zip-lock sandwich bags.  I think with our annual rainfall that the bags would disintegrate before the season was up. 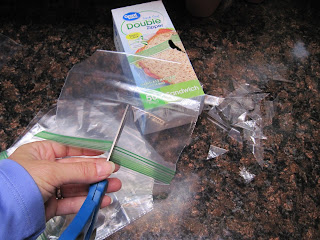 The bags need a little prep before you apply them.  First you cut off each lower corner which will allow any water to drain out.  Then you cut just through the zipper so you can close each side around the stem without there being a gap.  A gap would allow more water and insects in as well as encouraging the zipper to unzip.  To apply, just open one side of the zipper, place the bag over the apple, and zip it tight. 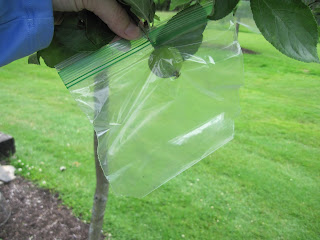 While you are bagging the apples is a good time to thin them out.
Clusters of multiple apples should be thinned down to the strongest one.
Remove any already damaged fruit.

The apples will grow just fine in the bags.  I've had some apples which got so big the bag had to be cut off of them because they had stretched the bag and were too big to come out the top.

As you can see, the bagging makes a HUGE difference in the appearance of the end result.  Clean, uniformly shaped fruit.

A brief recent article from the Farmer's Almanac:  Growing Organic Apples with Fruit Bagging
An article from the University of Kentucky:  Bagging Apples: Alternative Pest Management for Hobbyists

Posted by SmartAlex at 9:55 AM