When I plan my garden each year and set out tasks to do each week I never imagine that I will have to be doing them in fifty degrees and pouring rain.  But it seems like it always works out that way. 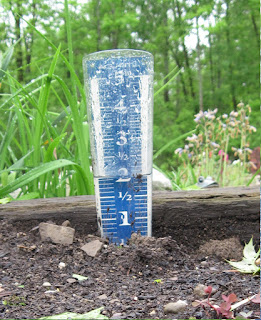 Last evening we got two inches of rain in about an hour, dime sized hail, and circular winds that took out one tree and sent us to the basement for a few minutes.  After the worst of it had passed the power went out for three hours and the water pumping station went down.  The BPU lost power and their emergency phone lines were down (poor planning with running the phone through the internet service?  This never used to happened with Ma Bell) So we had to call the Sheriff's dispatch to report the outage.  You don't need to live in a flood plain to have water troubles.  We live on a hill, but it has a large flat top, and every time the rain and lightening would break we would go out to clean drains (dry wells and "dry" creek beds) and look for trouble.  We finally had to get the generator out to run the basement sump pump.  The power came back on at midnight. 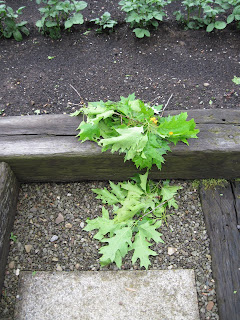 One lawn flooded completely, one end of the garden and two raised beds were standing water, mulched washed into gravel and lawns, there were arm loads of leaflets and branches down everywhere and the whole place looked completely bedraggled.

Friday was lovely weather and I spent six hours sealing the fence with Thompson's Water Seal.  I had spent a day last weekend staining the new top rails to blend with the old wood.  It was nice spending six hours in the garden on a beautiful sunny day, but after about four hours it ceases to be fun.  I told myself that when I either fell off the step ladder, or spilled the Cool Whip container of sealer on myself I would quit.  Luckily I got just about to the end before that happened.  Then I quit.


So after our long and trying night, I went out this morning to start the clean up.  The tomatoes and lettuce needed baths so after two inches of rain I spent some time with the watering wand washing dirt off. 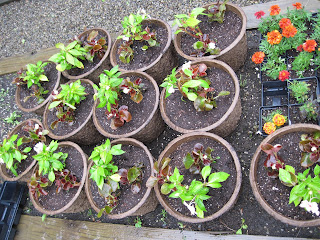 Of course it began to rain again this morning.  Basically another downpour.  When I mentioned that I never imagine I will end up doing these projects in the rain I was referring to the Sunpatien and Begonia pots for the front landscaping.  I had planned to do these three weeks ago and it hasn't happened, so I set everything up in the temporary building where my potting bench is and potted in the rain. 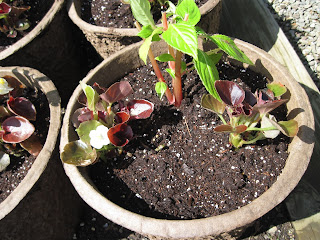 They were getting pretty leggy and root bound.  I cut them back severely so they will branch out and thicken up.  In two or three weeks they ought to look really nice (or at least that's the plan) and at that point the peat pots will be sunk into the front landscape.  The past couple of years I have used four inch peat pots for individual plants and this year I am going bigger to make it easier to water.  Its tough to water a four inch pot underneath a large bushy plant. 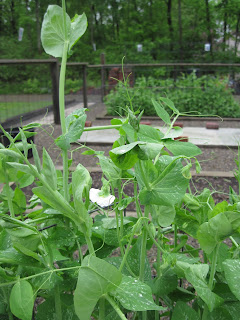 Two varieties of peas are beginning to bloom 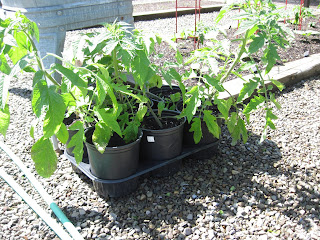 My spare tomatoes need to be staked.  And possibly need a home. 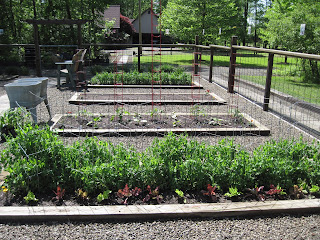 The garden is beginning to look like a garden.
The only things left to plant are the pumpkins 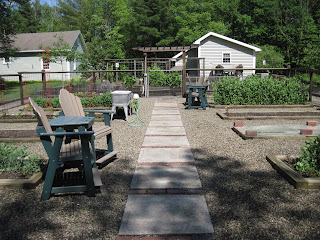 Posted by SmartAlex at 5:16 PM