Potatiskorv: (more commonly known as värmlandskorv in Sweden) is a regional Swedish sausage from Värmland, made with ground pork, beef, onions and potatoes. Potatiskorv is traditionally served hot at Christmas in Värmland but often served hot or cold throughout the year. "Potatiskorv" is what this sausage is called in parts of Värmland. In most parts of Sweden, the word "potatiskorv" is unknown, while "värmlandskorv" is well known and sold commercially around Christmas throughout the country, for the benefit of people from Värmland. In the United States, "potatiskorv" (usually written "potatis korv") is the name that has stuck among people with Swedish roots. (SourceWikipedia)

In our area, it is not difficult to find Korv in the grocery stores, but like any traditional dish there are enough variations that you really have to make your own if you want to capture that taste as you remember it. Making Korv is something we only do once a year.  That means there is still a little trepidation and dread before you get started because it is a big project and you don't want to mess it up.  We wisely kept good notes which extend beyond the tweaked recipe to sensible instructions like which bowls to use for what and what to prep first.  In fact steps one and two are:

And then continues on to getting the casings prepped and how many cranks of the lever on the sausage stuffer gives the right amount of sausage for a quart freezer bag. 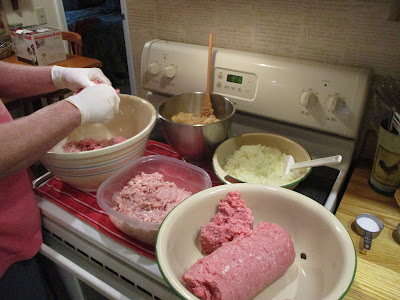 When we started out we would even grind our own meat, starting with pork shoulder and chuck roast.  We got the best prices that way.  Now we just keep an eye out for ground beef and ground pork to be on sale, and stock it away in the freezer.  The recipe calls for 5# beef, 5# pork, 5# white potatoes and 3# yellow onions.  When all is peeled and prepared you end up with about 15# of Korv. 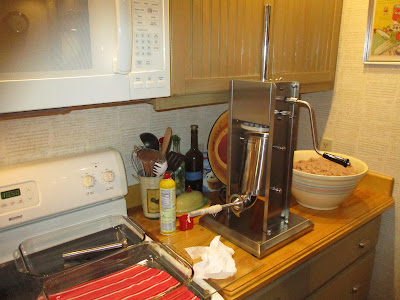 The meat is seasoned with salt, pepper and Allspice.  About half way through mixing, we make a sample patty which we cook in the microwave so we can sample how the seasoning is going.  It doesn't have the true taste of Korv in the microwave but it lets you know if you have enough salt and pepper going in. 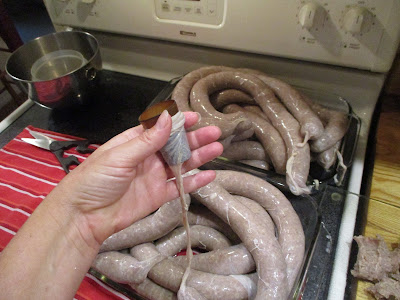 Inevitably, there will be about half a pound of meat left in the stuffer pipeline that has to be removed and then hand stuffed.  I get out the cow horn for this last link.  The big stuffer works so slick that stuffing the sausage is a lot of fun.  Having a cow horn on hand to deal with the problem is fun, but after that moment it turns into a lot of work!  I would HATE to have to stuff fifteen pounds through a cow horn!
We have batch #4 of Glögg on the stove, and Korv is what's for dinner.  Each link is just shy of a pound.  I lay it in a baking dish and cover it with foil.  Bake at 350 degrees for about 45 minutes.  Then remove the foil and turn the broiler on low for about 10 minutes keeping an eye on it until the casing browns up nicely.  I serve it with pork gravy, mashed potatoes (or scalloped potatoes) and peas.  Leftovers make good sandwiches.
Posted by SmartAlex at 2:04 PM