The Garden of Good and Evil


~ Minerva
Midnight in the Garden of Good and Evil


I believe I may be giving the impression that gardening is just a walk in the park for me. It's time to fess up a little. Why tonight? Because tonight I realised that I went and missed the ripening of the first slicing tomato. Ummmmm ...Duh?

Well heck, it's at least three weeks early! Thanks to the super growing powers of my raised bed, paved, hotter than normal, growing Utopia.
Towards the end of our wine drinking/gardening hour, I happened to notice from another angle, that the Black Krim had a ripe tomato. Actually an over ripe rotten tomato. To be fair, it was jammed in the ladder and covered up with heavy foliage. But still... I knew it was there. I just wasn't paying attention. In my defense, I think this one was not just ripe to the point of rotting, but was affected by Blossom End Rot like about 15% of the fruit on this plant have been. I saw that it had a dark spot last weekend, but I gave it a chance of survival. It failed. I pried it out unceremoniously with scissors, and gave it a proper burial. 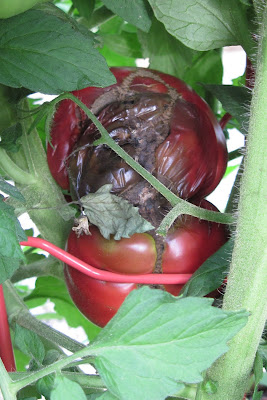 The trick to having a "green thumb" is not merely possessing some majikal power afforded by knowing the secrets of what to plant and when and where and next to what. The other half is being aware of what can go wrong, spotting it before it gets out of hand, and not only knowing what the solution is, but having the supplies on hand to address the situation immediately. This is my seventh year of gardening. I am finally progressing past the point of Dumb Luck, and am slowly making headway into the territory of Experience.

My Grandmother once was examining an oil painting. She said "It looks almost perfect until you get your nose right in it." My Uncle quipped from the background "Most paintings do look better before you put your nose in them." And so do most gardens.  They may look great from a distance... if you squint... but get your nose right in there and count the weeds and it's a different story.  So, here, in no particular order, is an up close and unflattering glimpse of the garden problems I'm facing this year, and what I am doing to solve them.

Blossom End Rot: Affecting mostly the Black Krim (I've already tossed half a dozen) and now this one on the Amish Paste.
Solution: Calcium. I've worked a small amount of Bone Meal into the soil around each plant, and until I discovered that the ripe one had lost the battle, I hadn't seen an new occurrence in over a week. 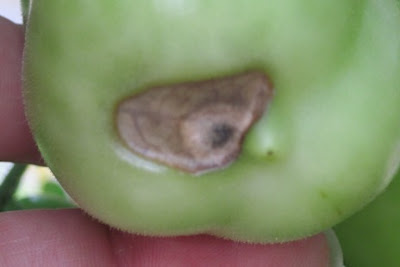 Magnesium Deficiency: Indicated by loss of color in the leaves. At first only two plants side by side were affected, but I've noticed some minor loss of color in the second bed as well.
Solution: Epsom Salts (Magnesium Sulfate) One tablespoon per gallon of water. Magnesium and Calcium actually work in conjunction with one another (sort of like Vitamin D being necessary for the absorption of Calcium) , so what I did was sprinkle a bit of bone meal beside the plants, and water it in with the Epsom Salt solution. 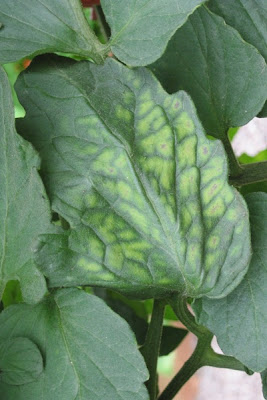 Powdery Mildew: YUCK! The bane of cucurbit aficionados everywhere. I've lost entire crops to this crap, and while my cucumbers have always survived, some years they look like heck before they're done.


Solution: Dilution of Baking Soda or Hydrogen Peroxide or Milk sprayed on the leaves. I actually bought Serenade spray which has been working well. It stinks. But it works. The trick is to spray weekly BEFORE you see signs of mildew. Here you can see a small round spot on the left, and then a larger area of mildew on the right. Remove the worst affect leaves and dispose of them. 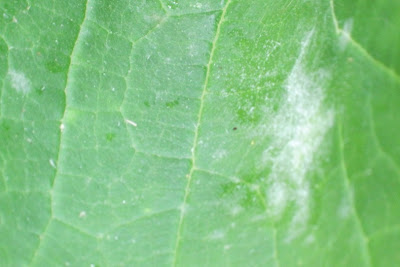 This has been a big problem for us in the past. It get's on the Lilac and the Irises and completely killed the squash and pumpkins in 2008. The past week and a half it has been very humid. It started on the neighbor's crookneck squash, and although I sprayed the heck out of everything when I found it Sunday morning, and had already been spraying mine as a preventative measure, it is slowly spreading. 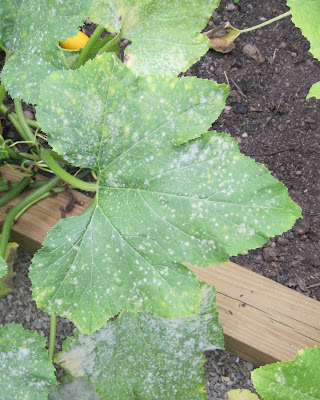 Sunburn: This is on the Incredible Edible Undead Tomato. It has several fruit on the top of the plant which are sunburning because it is out in the open, on it's own, in a pot. The fruit on it's lower branches are shaded by leaves and doing fine.


Solution: I could construct some sort of shelter with shade cloth to filter out some of the sun, but I have plenty of tomatoes in the regular rows, and with their massive foliage, they aren't having any trouble, so I'm letting these unfortunate individuals go. 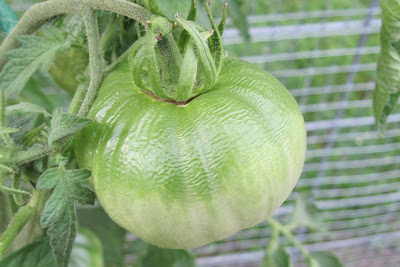 Poor Germination: The third planting of bush beans did not germinate well, and those which did germinate damped off. In this row, only two survived, and I had to plant in between with another variety. The two large plants are Blue Lake, the smaller fill ins are Isar filet beans planted two weeks later. And then three weeks later to fill in the Isar which didn't germinate on the fill in planting.


Solution: Besides the re-planting... better luck next time. I had some trouble with this same packet of Blue Lake seeds in 2008 and these are leftovers, so I certainly can't complain. 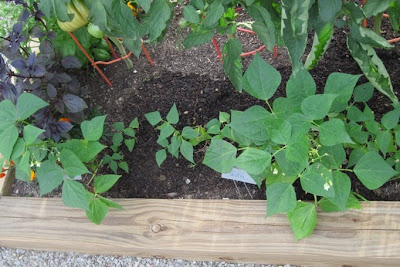 General Dishevelment: This is the summer squash and Borage bed.
Solution: Hey, it's late in July. Some stuff is starting to look a little old and worn out. The zuchini plant is growing to the left, and the Borage, which needs a lot of support, is breaking and leaning right and just wearing out. The Borage is so top heavy with flowers, even though I carefully placed stem supports each time I knew it was going to rain, they still broke down. Next year they will be in grow through grids. This bed is about done. The one zuchini is producing very well (and may be spared), but the other two squash plants aren't setting any records so I will be pulling them out and planting peas and carrots for fall. I have enough squash (ok, TOO much) with the plants in the second bed anyway. 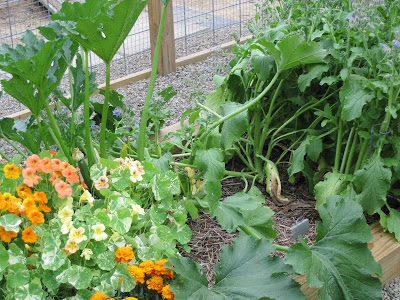 Japanese Beetles: This year they are a minor problem. We have about 2% of the number we did last year. Last year they all but destroyed the five Linden trees we planted, along with the Porcelain Vine and half of the Black Berries.
Solution: We put down Milky Spore last fall and again this spring so about 80% of our yard has been treated. I also have a Bag-A Bug trap up, I am seeing NOWHERE near the numbers we had in the past when I would have 3 or 4 traps up, and have to empty them every few days. These three met their end with the Drop and Stomp method. I mean they were on the Borage. The Holy Grail of Companion Planting. The stuff that is supposed to cure all pest problems. The nerve. 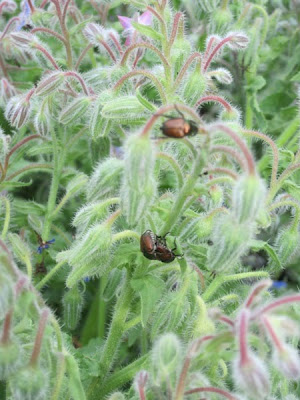 But all's well as ends well. I went in to finish dinner, but as I was boiling water for beans, I came down with a sinking feeling that in my angst over the lost Krim, I had neglected to check the Jap I knew was about ready. I ran back out and sure enough, it was ripe and ready... 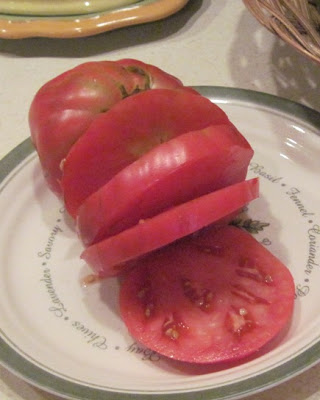