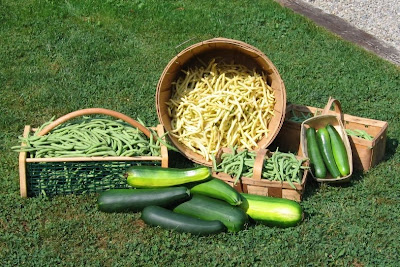 Bush beans are one of my favorite garden crops. There is nothing that can compare to fresh picked green beans or even the ones you freeze yourself. Canned beans just won’t ever compare. Tim’s Uncle Lloyd, who now lives in South Carolina, says one of his friends once told him “That’s the thing about Northerners, they under cook their green beans.” You’re darn right we do! They should squeak when you bite them. And we under cook our corn on the cob too… or you Southerners over cook yours, depending on your point of view. But that’s a topic for another day. Every time Lloyd comes to visit, I make him green beans and corn on the cob. He seems to prefer the Northern cooking methods. If not, he’s too Southern to say otherwise.

The bush beans are just now coming on strong. And this is where I must make my first mention of “gardening for the old and myopic”. I prefer yellow or purple beans. Why? Because I can see to pick them. This is doubly important in bush beans because they’re low to the ground, and they look a lot like stems. Plus the yellow Goldmine beans from Burpee are just beautiful creamy beans. 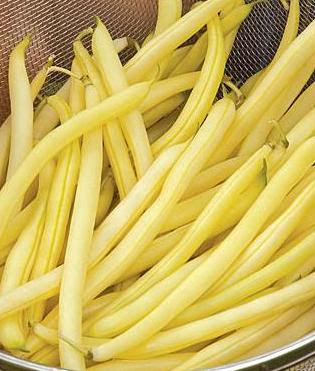 And the Purple Queen… I’ve rarely seen a more gorgeous vegetable. Those purple pods look like frosted art glass hanging against bright green leaves. They’re simply stunning. The only problem with purple beans is when you cook them they turn boring green. The water, however turns a brilliant green. I’m talking lime jello green. It’s rather shocking. 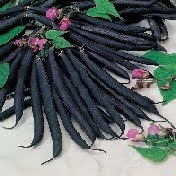 My favorite green variety of bush bean is Blue Lake 47. I’ve tried a few others such as Contender and Tenderpick, but Blue Lake has the yield and the quality that I’m looking for so it’s the one I go back to year after year. This year I also planted Isar yellow filet bean. It will be a little while before they produce, so the jury is still out on that one.

I start planting the bush beans in mid-May, and keep planting a row every week or two until I run out of space or beans. I’m planning to plant another row or two in the coming week. I’ve found that the Goldmine variety, if you leave them alone when their first crop is over, will rally again the end of August and produce a nice second crop. That is if the weather is milder and they don’t burn up and dry out before then, and you are kind to them when you harvest the beans and don’t break the heck out of the plants. It’s also important to keep them picked and not let any get too mature or the plants will just plain quit.

Posted by SmartAlex at 4:23 PM