Morning in the garden.
Everything still looks respectably green and healthy 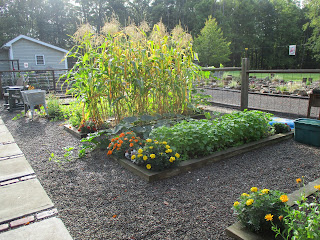 When I looked at those two photos side by side on my
desktop it was sort of a cool effect so I stuck them together.
Click photo for larger view

I have several beds with young buckwheat.  These late cucumbers (below), seeded mid-July, are starting to produce a few cucumbers. 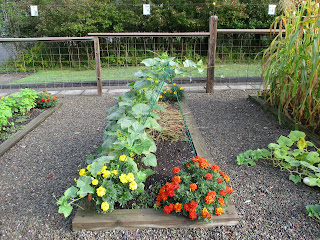 The cukes are smallish, about the size of Italian Sausages,
but very useful for the occasional dinner salad 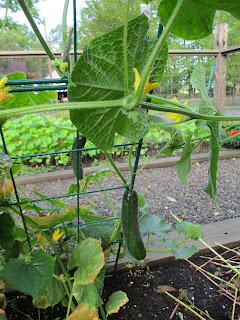 The sweet corn is done.  I need to cut the stalks which I plan to use for autumn decor at the doorway.  The yield was fairly low.  I think I crowded them too much.  Next year I will be one more step up the learning curve on that.  But all of the ears were very very sweet.  Last year I heard several people just rave about the taste of the local corn and we never got a good batch.  I got our corn from two different farm stands throughout the season, so several different varieties, and not one was really any good.  I expect to have at least one meal each year that is exceptional, but last year the taste was all below average.  That's why I grew the Gotta Haveit which I've grown in the past and the taste did not disappoint.  I also had enough to put I think ten double portions in the freezer and I am buying some additional from the farm stand to bring my stock back up to twenty which will hold us over. 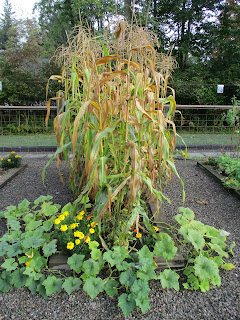 At the feet of the corn I have a few pumpkin vines. 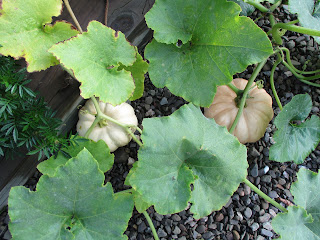 I still have enough tomatoes coming to keep me in sandwiches.
There are four vines left with very few leaves but several fruit each 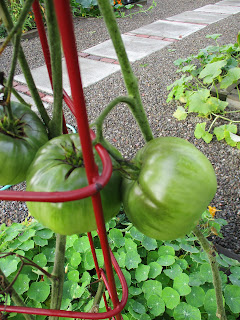 The cantaloupes are beginning to ripen.  They are small but tasty.  I don't think I'll bother next year.  Its an awful lot of maintenance and waiting for a few average melons.   Ironically, the yield is higher this year than last, if I can keep the vines going. 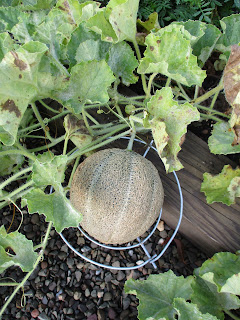 My Dunja Zucchini is finally starting to mildew.  It still looks pretty darn good for an aging squash plant.  I have not removed a single leaf. 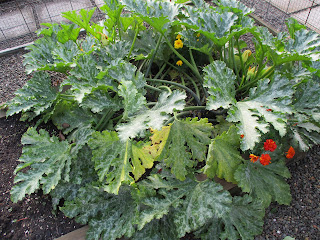 It is still steadily producing squash.  I have more than enough zucchini bread portions shredded and frozen and I have a face cord of squash stacked up in the kitchen waiting to be used or frozen. 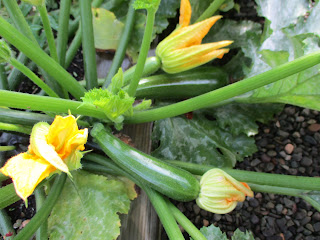 The old bean plants are producing a small amount of rather tough husked beans.  The plants are still healthy and I can see the top growth is preparing to put out new flower buds.  I ought to pull them out, but I just haven't gotten to it.  Since they aren't ugly, it hasn't been high on my list. 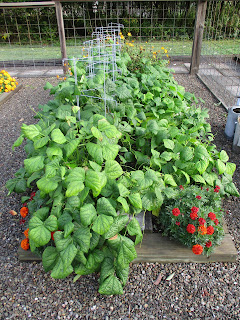 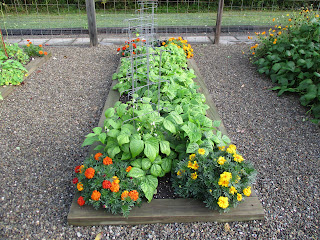 I found enough young beans in there tonight for supper 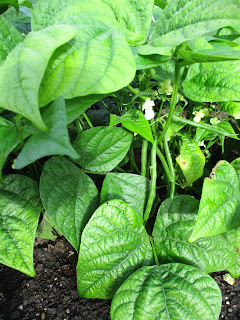 As for my other odds and ends.  Below is a Musquee de Provence pumpkin.  I have five nice ones growing and a couple are just beginning to color up.  I've never made pumpkin pie from scratch and these are supposed to be excellent tasting. 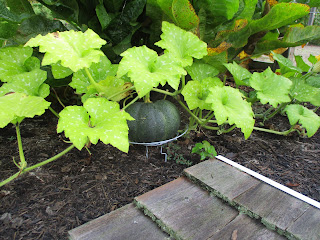 I am beginning to use carrots.  These went into the crockpot with potatoes and pork chops.  They are a mixture of A1 and Scarlet Nantes.  I've always liked the A1 because they are long and slender, but when I felt I was getting a poor germination with them I picked up a packet of Scarlet Nantes and over-seeded with those.  I have to say the nice thing about the Nantes is they fill out to a blunt tip that is easy to trim whereas the A1 has a long unfilled root at the end which feels wasteful to trim off. 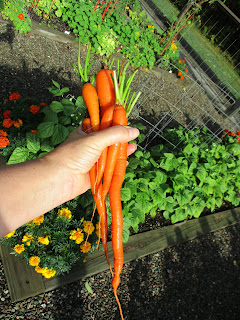 I've harvested all of my potatoes.  A low yield.  My plants did well but never flowered.  I have to say that the spuds were as near perfect and disease free as I could want.  I did get one too close to the surface so it has a big green spot, and one inexplicably rotted almost completely away but the others are smooth and scab free with no wire-worm holes.  Since I have a hard time storing a large amount anyway, I'm pleased with the result.

In addition to the dozen cauliflower plants I already planted I planted another dozen of spare transplants in the potato bed.  Fall lettuce will be planted under the frame which will hold a frost cover.  The lettuce seedlings are in that flat waiting to be transplanted but they have stubbornly refused to grow at all in the past two weeks.  They are still the size of dimes 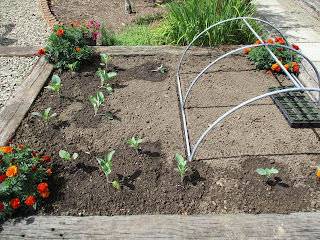 So that's the status of the garden.  I have yet to do my Good Bad and Ugly synopsis of this season.  It feels like such a long season that the task is almost insurmountable.  I've had a lot going on in the garden this year, and I still have a lot to pull out and tidy up before leaf blowing season starts, and yet I've just planted two beds, and begun harvesting from two others.
Posted by SmartAlex at 8:35 PM