Another thing we accomplished over the past couple of weekends:  Our long awaited fire pit is finished.   We probably have at least two or three good sized bonfires each year to take care of the tops of whatever trees we've had to take out as well as any fallen limbs and general brush.  We sort of enjoy these fires, but they are too massive to sit around and roast marshmallows over.

For many years we've been wishing we had a fire pit for cool evenings and early autumns.  We also wished we had a place to put the lawn furniture where it didn't need to be moved every time the lawn is mowed. This patio was built from about 500 re-claimed city road bricks and other reused materials.  It doesn't look like a huge project, but it took more than four full days of dirty, heavy work to complete, in addition to brick-getting excursions. 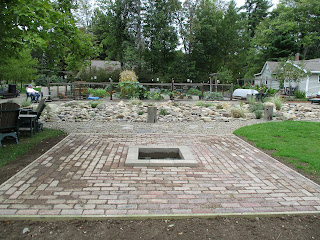 Day 1 involved leveling the site and building the frame out of reused 2x4s.  The ones we had to use were fourteen feet long, so the patio is fourteen feet square.  There is also a nine inch drop from right to left.  The slope of the lawn had to be excavated and the frame leveled all the way around. 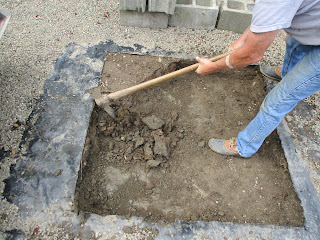 Day 2 the pit itself had to be dug (pick-axed) out of the hard clay ground.  There is a level of concrete blocks at the base, and the pit is filled with six inches of gravel to hold rainwater below the surface while it drains away (slowly - verrrry slowly).  A second layer of solid blocks was glued on top of the foundation blocks to raise the edge above the level of the patio.   We had a heavy iron grate which was cut to size and placed in the bottom of the pit, sitting on house bricks to further elevate the fire surface above any moisture. 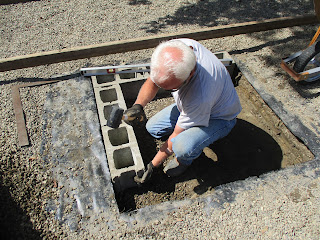 Days 3 and 4 was bricklaying.  The bricks were all "free".  They came in two batches.  The first, largest pile of about three hundred was found and brought to us by someone who owed us a favor (debt paid in full).  We also had almost a hundred bricks hanging around which we have used to hold things down and prop things up.  But the last hundred and forty had to be searched for.  Finally, the exact right amount of bricks was located, the only price being the effort of hauling them out by hand a thousand feet from the road and a nasty case of poison ivy.  The other alternative was to buy them from the city scrap yard.  .75 per brick, and you still have to go get them and load them yourself.  So it all worked out, except for my poor husband with the poison ivy. 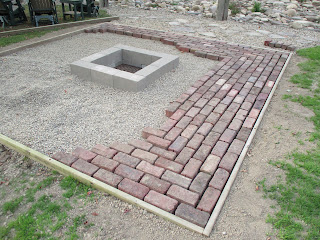 Anyway, the hundreds of bricks were laid over two day's time.  A careful eye was kept on all the gaps as well as the level.  Then size 1A gravel was swept into the cracks 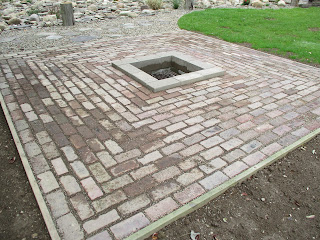 Each time it rains it helps the "grout" settle into the cracks.  We've used the 1A on another brick walkway and liked how the jagged edges knit together so well.  It will probably need a little more added as the gravel slowly works its way down to ground level and forms a hard network.  The top soil around the low sides has been replaced and graded into the lawn and grass seed planted. 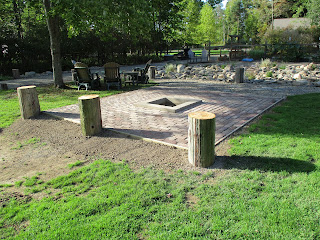 We added a few cut up telephone poles that are fanny height and give a good definition to the back of the patio.  These will have some plants planted between them. 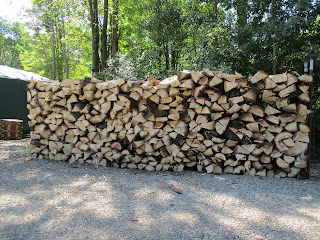 Last month the poplar tree (which fell two winters ago into an area too wet and mucky to get the tractor into until this summer) was hauled out and processed.  We have plenty of nice split cord-wood to feed our autumn fires.

Our city still has a lot of brick streets.  After laying two hundred square feet of bricks you begin to wonder how it was done on such a large scale.


Jump to 2:00 to see the actual brick laying

And this is how it happens now

Posted by SmartAlex at 9:16 AM