Awhile ago we spent an afternoon watching the Mourning Doves make a nest.  It isn't uncommon for us to know where they are nesting.  And it isn't uncommon to see them in the garden.  But we don't usually get a front row seat to the whole thing.  It took them a few hours.  Whatever nest material they had scored was close and plentiful because they were back and forth in a couple of minutes.  The nest was located in the viburnum bushes about 15 feet from the garden fence and just above head height.

Now I didn't count the days, and maybe I should have.  Now that my planting is done, I rarely know what day of the week it is, much less the date.  But I knew they should have hatched.  I saw the nest was abandoned and at first I thought that something got them.  Then I found them. 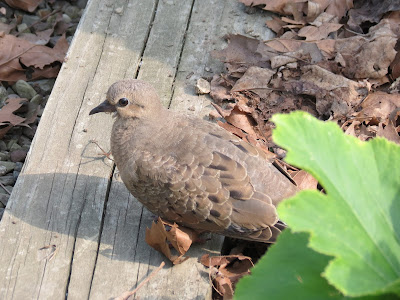 This is not the first time the Doves have used the fenced garden as a daycare location.  The gravel is a good camouflage for them.  As soon as I notice them I start putting out a dish of water.  They are such dum-dums.  They have very little fear of humans, but if you get closer than four feet or make sudden moves, they get nervous.  I can usually find them somewhere in the garden each morning and evening.  They like to search for seeds in the beds which requires throwing all of the leaf mulch out onto the gravel. 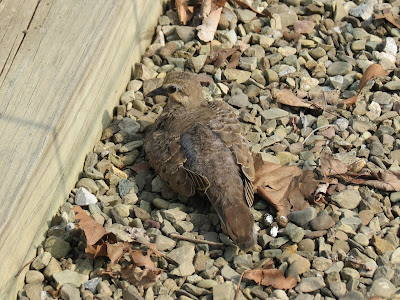 Just now I went out to water something.  They were both sitting about three feet from my watering cans.  They were not worried.  They didn't relocate at all.  They just sit there and blink at you.

Posted by SmartAlex at 5:48 PM

Labels: Birds and the Bees