The journey of a thousand miles begins with one step.  We are on step # 1,325,844 and our feet are killing us. That is also the amount of money this has cost us (in pennies not dollars).

A lot has happened since the Dangerous Trees series:

The Journey of a Thousand Miles....

After the first round of cutting, we spent six days straight in the woods pulling out logs, cutting out damaged smaller trees and trying to restore order.

It rained a little every day and the ground was rutted up, it was difficult to maneuver the tractor, and we were tripping over small stumps and getting hung up in poison ivy vine. That was Sunday through Friday.  On Tuesday of that week, a quick thunderstorm blew in one evening and took the top out of a remaining maple tree along the road and took out the power. Nice.
Several days after that, when we were trying to fish that downed tree from the ditch where the power company had left it lying, the top came out of one of the neighboring trees got tangled in the power lines and took out the power. Again.  That was twice in one week.  The neighborhood wasn't happy, we weren't happy but the line crew was prosaic about it.  They're used to fixing lines.  We are not.  We were trying to PREVENT the trees from coming down on the power lines.  Not CAUSE it.  Now that the large barrier trees were removed, the inner trees were much more vulnerable to the wind so they had to be removed back to the point where the woods got thick again.
Because of these two power outages, much earlier than originally planned, Larry the Tree Guy and crew returned for round two.  At this point in the summer I am beginning to lose track of the narrative on this whole process but suffice it to say: it is hot, it is muddy, it is buggy, we are tired and sweaty and we have all had poison ivy.  Even Larry.
The Big Yellow Birch Comes Down
By now, the difference is dramatic

This corner of the property was pretty crappy to begin with.  It sort of bothered me now and then.  Yes, there were some nice old trees and the undergrowth and sheer number of tree trunks screened the house from that section of road.  But it was full of dead and dying trees, mangled saplings, skunk cabbage, weeds and muck.  We don't ever want it to be lawn, we have enough lawn and the new wide open area is half an acre square.  But it might be nice as a wildflower meadow.  It is good that it is being cleaned up and it will look much nicer when we are done.
We will need to be able to brush-hog it so it has to be leveled and graded for drainage.  In order to do that, it needs more clean fill.  In order to do that the stumps have to come out.  In order to do that the stumps need to be accessible. 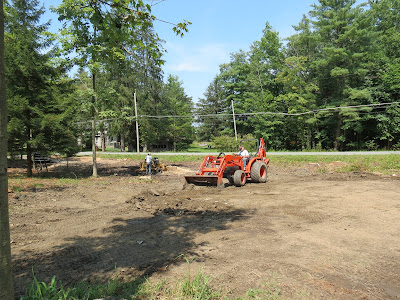 Almost all of the debris has been removed.  The town is coming to clean the ditch.  After the ditch is cleaned we will put in a culvert pipe and access from the road.  Then we will bring in more fill and finish the grading.  And the good news is... when sitting on our deck the house is still screened from the road. 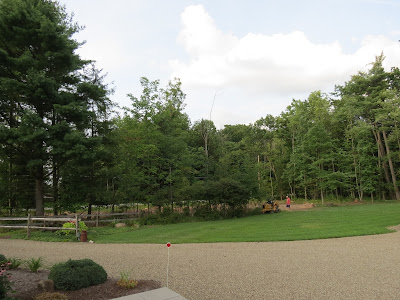 Posted by SmartAlex at 7:22 PM