The Architecture of Companion Planting

It probably doesn't come as a surprise to you, but I'm a planner. I have spreadsheets and lists, and computer files for everything. My goal for the garden, is to have each bed planned to make the best use of companion planting, crop rotation and successive planting to maximise the garden output. Since last year was a non-garden year, I spent a good deal of time researching companion planting, and figuring out what was most important to grow. Throw in a bit of multi-generational farmer collective unconscious, and I have a pretty efficient plan. I was very happy with how each of my beds turned out, and with a few minor adjustments, I'm looking forward to an even more efficient layout next year.

The Cucumber/Bean/Sunflower bed is my favorite. Next year I'm going to go ahead and add a little Nasturtium to it. I started with a line of "pea fence" down the middle (I've had these for years, and they work great and store easily) with cucumbers every 8 inches or so, and sunflowers every foot. Although cucumbers are not aggressive climbers, they are climbing the sunflowers quite well. I've noted that cukes always seem to grow primarily east, probably seeking the morning sun, and not ambitious enough to follow her in her climb as the sunflowers will, turning their faces first east, then west with the sunset. (click on any photo for an enlarged view)

Then down each side I put a row of bush beans. I always wish that the plants would produce when they are mid-sized and still tidy, but by August, they resemble a rain forest, and vines are slowly creeping down the walks littering with cucumbers as they grow. Next year I will give the sunflowers and beans a head start, planting them mid-May, two to three weeks ahead of the cucumbers. At this point, you can't really distinguish bush from vine, but the beans are in there producing very well, ejoying the draw of the abundant cucumber flowers to attract the pollinators!

The sunflowers are mainly for interest. My favorite seeds are Parks Large Flowered Mix. The bumble bees enjoy them most, and I rarely have the heart to cut them and bring them inside, although, that is always the plan. Having them planted down the middle with the pea fence makes it easy to tie them up and prevent the cucumbers or the rains from pulling them over into a jumbled mess. 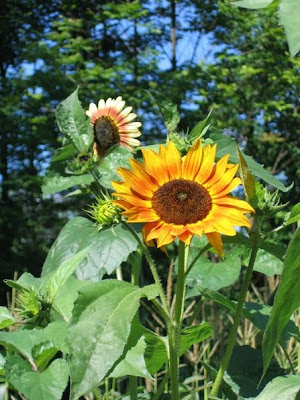 Another successful plan was the Summer Squash/Cucumber bed. This was actually the second succession planting of both the summer squash, and the cucumbers extending the season by several weeks. In this bed, the cucumbers are planted on a pea fence down the far side, and the squash are centered down the bed. Everyone leans east, and I left plenty of room to grow in that direction. I planted Borage from seed between each squash plant, timing it just right so the squash are supporting the Borage and keeping the heavy flower heads from leaning like the other bed where I used Borage transplants.

We've been enjoying a nice crop of our favorite cucumber Marketmore. Back in 2007, I was picking a dozen every two days, which was a little too much! This year has been just right with about two a day, and the neighbor's excess for pickling. 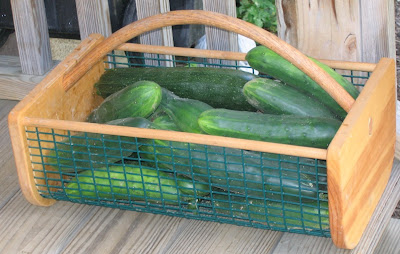 The pickles are great, by the way. Very crisp making the overnight liming very much worth while. Even the pickled yellow zuchini turned out good. They taste basically like normal Bread and Butter pickles, with a subtle undertone of squash. 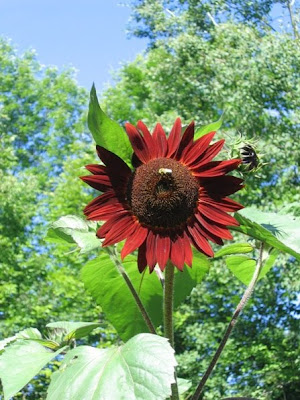 Posted by SmartAlex at 8:30 PM