Jelly is FUN! For one thing, I'm enjoying the suprise of finding those long forgotten plums. And while tomatoes and pickles are useful they are pretty common. "Wild Plum Jelly" not only makes a pretty and tasty gift, but it even sounds wholesome, creative and rare.

Since I've never made jelly, I got out my old Ball Blue Books and Canning bulletins from post WWI and read up on the process. I noted that the older booklets mentioned "Greengages" which , it turns out, is what these plums really are. Which variety is a mystery. I also found that I not only had exactly the right weight of plums for one batch, but they were picked at the right time. You make jelly out of slightly under ripe plums because they have a higher pectin content, and pectin is the stuff that makes jelly jell. If you have really ripe plums, you are better of making jam. If you aren't aware of the difference, jelly is made from clear fruit juice. Jam is made from the flesh of the fruit mashed up.

I did some more Googling, and found some more romantic and interesting plum info. Cooking with Plums from Country Living, and a bit of a field guide for guessing which variety of Greengage we might have here. Pretty Plum Prints

I spent two evenings making Jelly. The first evening, I made the juice. Five pounds of plums was expected to yield 5 1/2 cups of juice. The instructions called for crushing the fruit, but they didn't suggest how to go about this. At first, I cut a couple of plums open to remove the pits. I could see right away that I was going to lose valuable juice material doing this, so instead, I circumscribed each plum with a paring knife and pulled them apart, leaving the pits in. This let me check each plum, cut out any major blemishes, and discard the bruised ones. I ended up with only three rejects, and very few spots cut out. 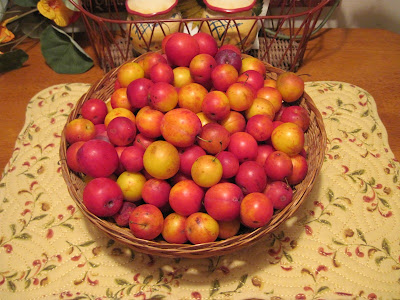 The next instruction was to add a 1/4 to 1/2 cup of water per quart of prepared plums. This is just to keep them from scorching to the bottom of the pan when you first put them on the heat. I underestimated, and added a cup. After half an hour covered on medium heat, they were bubbling away. I pressed a few against the side to check that they were soft without mashing too much flesh into the juice. I was amazed at the amount of juice which had appeared out of nowhere. 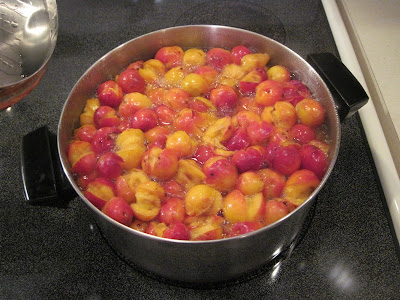 The next task was to get that juice drained. Here is where the older booklets were more detailed and helpful. Plus I remember my Grandmother making currant jelly. I have a clear memory of the currants hanging in cheese cloth from the towel bar of her wood cookstove. This part I knew....

I always stock some very tight knit cheese cloth. We use it for straining Glogg. Glogg is something you will just have to wait until November to find out about. Anyway, I cut a large piece of it and developed a strategic plan for getting the mush in the cloth, and the juice in the pot. 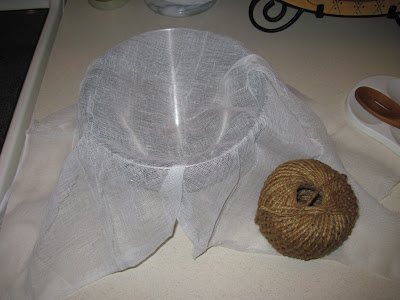 Over the past few weeks I've gotten quite adept at handling boiling liquid. I did wait until this had cooled a bit which was wise since I was a little cavalier about my volumes and whether they would fit in my chosen receptacles. 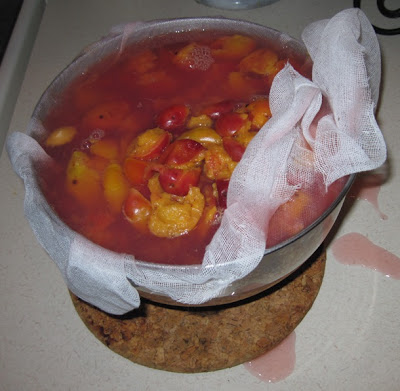 As soon as I gathered the cheesecloth and tied it into a bundle I knew I had most of my juice already. But the instructions suggested I leave the mush in the bag overnight, so I did. 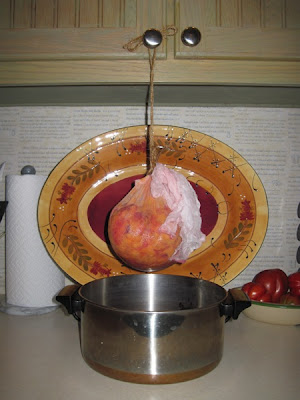 
And I proved that there was a whole bunch of pectin in this batch of plums. The next day when I dumped the mush, it had solidified into the consistency of Playdough. It was really ugly and brain-like. Tim suggested I not take a photo of it, and just get it out of the house and into the compost pile where it belonged. I think he found it rather creepy, hanging there from it's noose dripping into a pot. 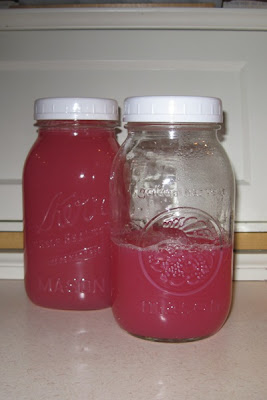 I put the juice in the fridge, and didn't get back to it until two days later. That's the beauty of jelly! Procrastination.


The canning process seemed pretty easy. Standard canning process, but only 10 minutes in the bath. Abbreviated canning! There was just the complication of the whole messy jelling process. Once my jars were ready and heating in the water, I got the juice up to temperature, adding first the pectin, then the massive amount of sugar, which I had premeasured so I wouldn't lose track. Mixing the jelly is much like making jello. Everything is sticky, and soon every piece of cookware you own is covered in a film of goo. And when jelly decides to boil, it gives no warning. One moment you are stirring pretty pink juice, and in an instant you are dealing with a bubbling cauldron. 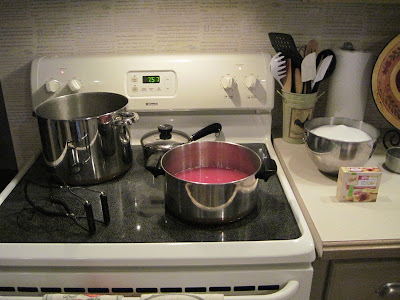 I ladled the juice into the hot jars, being careful to avoid the solids that were trying to develop in the pot. I tried to remind myself this was my first try and I wasn't preparing a State Fair entry, but nonetheless, I was very particular about the quality I was trying to achieve, and very pleased with the results. I had pans of hot tap water to set each jar in as I filled them three at a time. Then I cooked two batches in the canning bath for ten minutes each. As I was picking them out of the bath, the seals were already beginning to pop. I was so intent on getting the jelly into the jars, I almost forgot to lick the spoon! It tasted better than I had anticipated, but tomorrow's breakfast will tell the tale...