Yes You Can ~ Bread and Butter Pickles

Since I have a fairly large (and expensive) garden, and I'm all about eating locally and being self sufficient, it is inevitable that I will have to can something. So far, my repertoire includes tomatoes and sweet pickles. I made a batch of sweet pickles back in 2007. We still have two jars in the cupboard. But Tim insisted that this is a pickle year.

The neighbor, Shelly, made dill pickles a couple of weeks ago. Yesterday they pulled their spent cucumber vines, accumulating about 18 pounds of cucumbers. Shelly eyed the pile with a marked lack of enthusiasm. "Look Shell'. More cucumbers! Yay!" I could tell Shelly was not up for another round of pickling. She was pickled out. " Tell, you what, in good neighborly fashion, I'll make these into sweet pickles, and we'll swap sweet for dill." The cucumbers were handed (perhaps shoved?) in my direction. The deal was done. So today was sweet pickle day!

I have collected a few Ball Blue Books from between the wars. They are very informational, full of recipes and advice (it would have never occurred to me to pickle walnuts), but mostly I love the illustrations. See how the steam curls wistfully behind her? And she's smiling! This must be FUN. 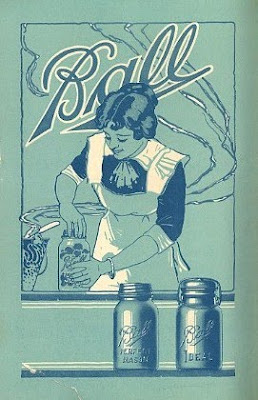 The 1916 recipe for sweet gerkins begins... "Scrub two hundred cucumbers with a small brush, put them into a stone jar, and cover them".... wait... did they say TWO HUNDRED? That must be one heck of a stone jar! Actually, I do have a stone "jar" (large CROCK) big enough to hold two hundred small cucumbers. But just for kicks, lets see what the spice packet I bought at WalMart 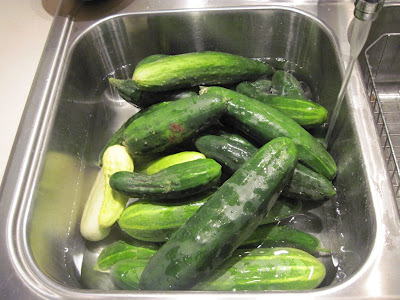 Now this is where my collecting comes in handy again. You don't want pickling lime or boiling vinegar in your aluminum pans. So, every large lidded piece of graniteware I have is pressed into service. Most of the sliced cukes fit in the large stock pot. 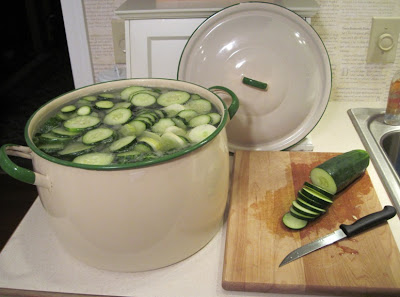 The rest... well the rest of them ended up in a slop pot full of lime water. I guess collecting pieces with their original label renders them useless for canning. 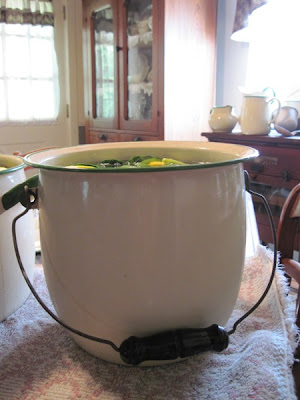 I like to use either Pickle Crisp or Pickling Lime to ensure that my pickles are crisp. If I were using actual pickling cucumbers, or small hard ones, I might skip this step. But when you're using a hodge podge of regular old burpless slicing cukes... better safe than sorry. I'm a little low on Pickle Crisp (hard to find these days) which can be added to the jars before they're processed, so instead I soaked the cukes in lime over night.

Pickling and canning is pretty simple in theory. But, it's a strategic nightmare. How do you get 10-12 quart jars hot, keep them hot, get the lids hot, cook your brine AND have burner left for processing? Not possible. I started with the pint jars anyway. They're easier to find homes for, and fit in the fridge better. I don't think I ever need a quart of pickles at one time anyway. Here I have 2 pots of sterile jars, the graniteware full of brine, and tucked in behind, a small sauce pot for the lids. The canning bath is out on the driveway on the turkey fryer! Tim is manning the fryer. He has a drink in hand, his CD player, and a lawn chair. 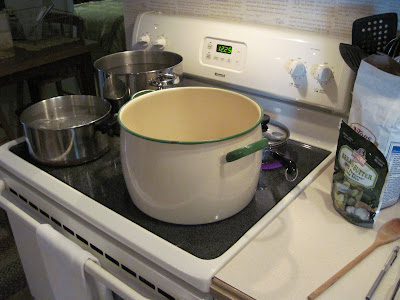 And so the fun begins. Or in other words: Havoc ensues.

Because you can easily follow the canning instructions in whatever book or spice packet you choose, I'll just give you a couple of helpful hints. 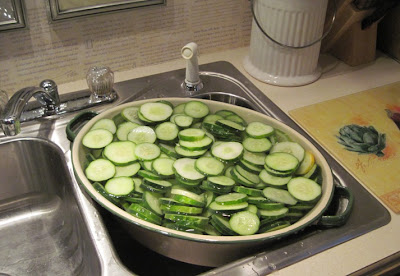 For the next hour I put the camera safely out of harms way. I cheerfully stuffed and simmered and bailed and added water. Water did boil. Not much mess was made. Tim hovered on the edge asking how much longer. After an hour and a half he became impatient. We had a lively yet good natured debate over whose idea this was (his) and he declared himself cured of pickle making forever.

I waited with bated breath for each of the lids to pop telling me that this was not a colossal waste of time. I even pickled a couple of jars of yellow zucchini as an experiment. Because, Lord knows, we always need another use for zucchini. And it all turned out perfect. Perhaps not picture perfect, but I'm still smiling. 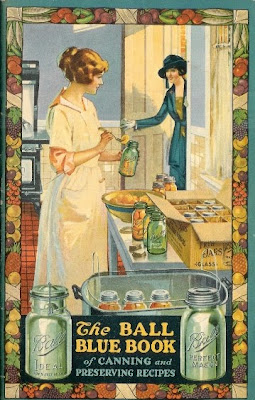 Labels: Preserving, Recipes, Yes You Can