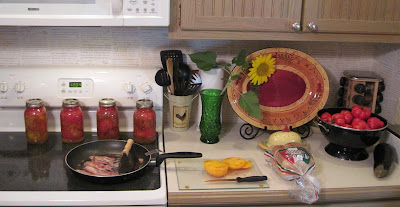 Yesterday turned into "Tomato Day". I had a large and varied assortment of tomatoes collecting on the dining room table, and it was obvious that something was going to have to be done. There are only so many tomatoes one person can slice and eat! I'm beginning to get tired of eating. There are always tomatoes to "deal" with. For some reason, the green beans are not quite so threatening. I mean, people don't make movies titled "the Green Bean that Ate Green Bay." Green beans, and summer squash for that matter, don't take over your kitchen and threaten to leave puddles of juice and attract fruit flies. I hemmed and hawed over breakfast, and finally got down to the business of sorting tomatoes.

First, with an eye to what is coming ripe in the garden, I set aside a nice Dr. Wyche for lunch and an under ripe Barlow Jap for "just in case". One thing I've been wanting to do is try my hand at some pasta sauce. I sorted out the deeply red, ribbed Costoluto Genovese and some Amish paste for this. Everything else, the Ananas Noirs, Black Krims, mystery varieties et. al. needed to be canned. This time was less stressful. Mostly because it wasn't the first time in two years. And also because, I just sort of woke up and thought "hmmmm, think I'll can some tomatoes", as if I were acting on a whim and not launching a strategic offensive against the ultimatum thrown down by Mother Nature. It went much smoother. I followed all the same steps as before, right down to removing the rug. I did learn a lesson from the cracked jar. As I stuffed each jar, I set it on the stove top in the "for good measure" pot which I had turned off, but was still hot. This made me a little less frantic during the jar stuffing phase.

I broke for lunch, and made that nice, yellow Dr. Wyche into BLTs. And then it was on to the sauce! 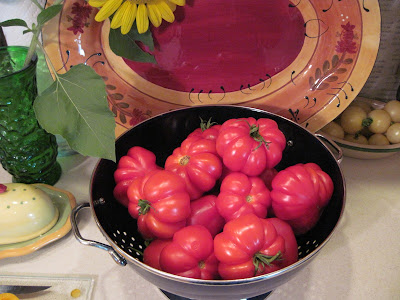 I happened to be watching the Food Network one day, and the guy was making sauce and it looked so simple. I printed the instructions off the internet and saved it. It turned out to be quite easy. You start with 20 paste tomatoes, wash them, halve and de-seed them, and bake them for a few hours. Yup, it was that easy. It became immediately apparent why the two chambered paste tomatoes are favored because they only have two (or three) globs of seeds. The ribbed Costoluto Genovese were more of a hassle since every convoluted bulge contains a group of seeds. Still, it didn't take long. I sprayed some Pam in a baking dish, loaded it up with tomatoes and sprinkled seasoning on them. Into a 325 degree oven, and within 10 minutes, the whole house smelled like Italy!
While they baked for 2 hours, I did some house keeping and made a batch of fresh salsa (more tomatoes). After two hours, you turn the oven up to 400, and bake another 40 minutes. This happens to be the right time and temp for an eggplant to roast, so I stuck one in and made Baba Ganush on the side. 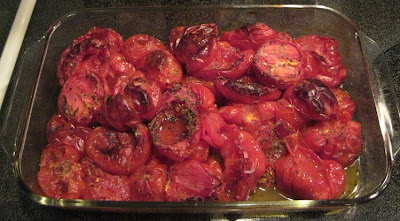 Now for the fun part. All you do is scoop these baked tomatoes into a food mill and grind them into sauce. Now I know you always get the caution to use non-metallic everything with tomatoes because the acids react with the metal and make the tomatoes taste funny. Well, I didn't have a non-reactive food mill, so I went ahead and used the old one I have. I didn't notice much difference, but maybe some day I'll have a special tomato mill and then we'll find out for sure. 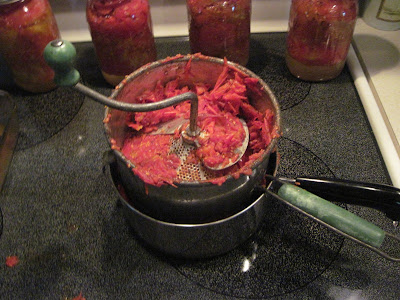 The first few tomatoes didn't do much. I looked in the pan and there was some red water. I thought this was never going to work. How much sauce could you get this way? I got a bit more aggressive, and the next time I looked in the pan, there was SAUCE. Well, I'll be doggone! I tweaked the seasonings a bit, and simmered it down. I ended up with a brimming full quart of thick sauce. I think tomorrow I'll add some home made meatballs, and we'll see how it tastes. 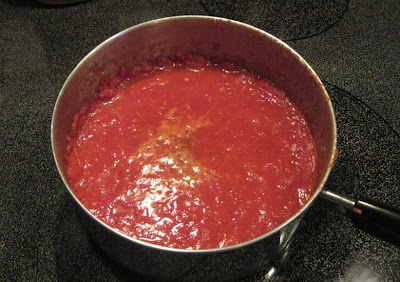 When all was said and done, I had four quarts of tomatoes, one quart of sauce, a batch of salsa, Baba Ganush, and one lonely Barlow Jap tomato. Down to one tomato! It's a miracle. Then a neighbor stopped by for some wine in the garden, and the lone tomato followed them home. I was tomatoless! But that was yesterday. 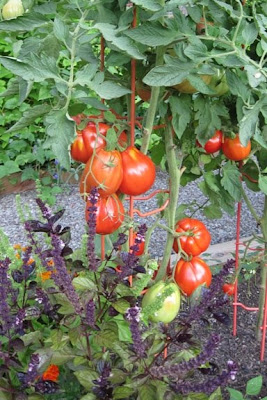 And tomorrow... these will need to be canned.
In fact, I think I'll do an experiment. They are all at the same point of ripeness (wonderful trait in a canning tomato variety) so I will can them, but freeze one bag. I've always been skeptical that freezing will alter the taste in a non-favorable way. I hate refrigerated tomatoes. But, I think I'm about done canning for this year. So, having one canned and one frozen from the same plant on the same day, will tell the tale. These are the Giant Pear 76 which is an Italian strain of the Giant Pear. There are 11 tomatoes all ready to go at once, and they're HUGE. Should be fun!

**FOOTNOTE: This morning I canned 3 pints of Giant Pear tomatoes, and froze 3 pints as a taste test. I love love love those tomatoes. Their skin slipped beautifully, and they are very meaty. I think I liked working with them better than the Amish Paste tomatoes that were in with the batch.
And the sauce was great on spaghetti!
Posted by SmartAlex at 6:23 PM