Life's Just a Bowl of Cherries 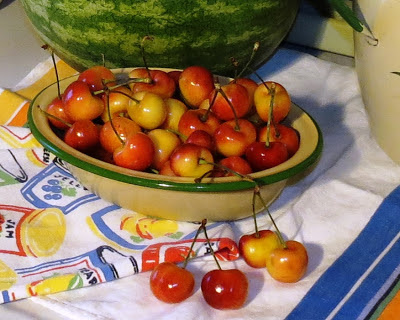 I couldn't resist these wonderful white Washington cherries today at the store.  And they taste even better than they look.  They are large and glossy and crunch when you bite into them.  Sweet as the summertime.

When I was a child, every summer my Grandmother would take us cherry picking.  We would drive up to fruit country, perhaps treating ourselves to a ferry ride across the lake instead of going the long way around. 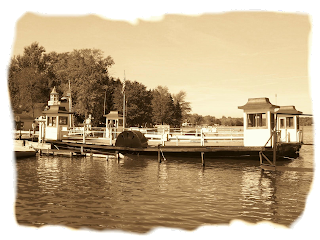 My mother would usually come along.  My sister and I were good cheap child labor.  I don't ever remember complaining about going cherry picking.  Grandma always made it fun.  We would go to our favorite orchard, Walker's, and check in at the house to get directions to where the ripest picking was.  We would park next to the old red barn.  Up near the barn were the strawberry fields and the berries.  Red raspberries would probably be ripe as well and we would pick a few pints of them as a treat.  We had the best black raspberries at home (to be eaten at breakfast with cream and sugar) so no need to get those.

Then we would take our baskets and drive out into the cherry orchards.  On a good year the trees would be heavy laden with huge, black, sweet cherries.  There were ladders to put in the trees and we would shimmy up, our 4 quart baskets hung over our forearms.  To deter the birds, there were gas cannons going off intermittently in the distance.  "Crack" the cannon would peal like thunder and the birds would whir off in a flock over our heads. 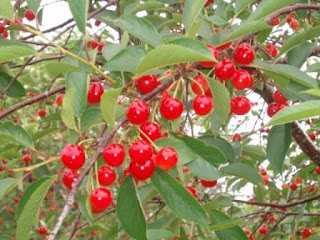 The sour cherries fascinated me.  They were almost iridescent.  I was always disappointed that they were not as tasty as they looked.  We would pick some for pies, but mostly we picked the sweet black cherries.  There was always a tree or two of the beautiful white cherries.

Another memory I have of my Grandmother is a story she used to tell about picking peas with my little sister.  My sister would have been about Kindergarten age at the time.  She said as they picked along the rows she would say "Holly, look at all the peas you're missing."  And my sister replied "They are growing behind me!" 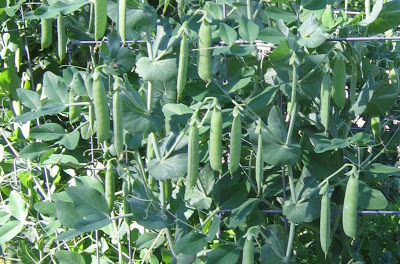 I can certainly relate to that this year.  As I pick along I look back over my shoulder and see some I missed.  Then I'll look from the other side...more.  I back track, seeing it all from the opposite direction... how could I have missed those?  And with all the rain we've had, the peas swell so fast as they reach the final stage of maturity.  What may have been a well picked row this morning now needs to be picked again.

My favorite garden activity is shelling peas.  Tim and I sit on the front porch, or back under the maple tree, and shell.  Its leisurely and shady, much nicer than making pickles or canning tomatoes.  This morning we shelled and froze two quarts which will make eight generous meals for two.  Then this evening we shelled and froze another quart.  I now have 31 meals put up and we can eat the remaining row fresh.  A banner year.

The good news is the first bed with it's three varieties is done.  And I need the space for later crops.  I pulled the plants and prepared the bed.  I had just set out a dozen cucumber transplants... when it began to pour rain.  Again.
Posted by SmartAlex at 7:47 PM