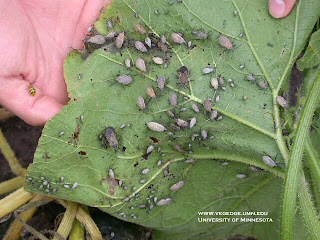 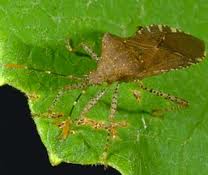 My single zucchini plant died.  I knew it was stink bugs.  More precisely Horned Squash Bugs.  I saw some eggs underneath the leaves.  I even saw a couple of them scurrying around.  I removed the eggs and the bugs.  The plant did not recover, probably due to the horrible wet cool weather coupled with having... well, only three leaves left.  After about a week, I gave up hope and removed the stunted plant.  I didn't think much more about it.  Zucchini are easy enough to come by.  Better luck next time.

This morning, while poking around the garden, I decided to investigate why one mound of Mike and Shelly's squash plants had died.  None of them were doing very well, but this group in particular looked really miserable.  I turned over one pitiful yellowed leaf and OMG!  Holy Cow!  Swoon!  Dead Faint!  The photo above is exactly what I saw.   Infestation is the only word for it.  Those nasty little buggers!  They're out of control.

Now I don't usually go around my neighbor's squash plants turning over leaves and nosing about, so I had no idea there were that many eggs, and I guess I timed it just right to witness a huge hatching of the nymphs. Wasting no time, I gathered up a garbage bag, removed the three heavily infected corpses of squash plants and dumped a bunch of Sevin Powder all over the area.  I came back a couple of hours later and scooped out a couple of inches of soil.  I want those things gone! 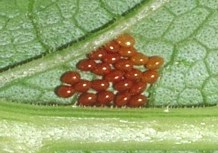 I don't know if they came in the soil of transplants from a greenhouse or if they just happened to find our garden this year and set up a productive breeding operation, but I can tell you we don't want to let those things set up camp around here.  I will be on the lookout for more eggs and snip the clusters off the leaves and destroy them before they hatch.  Add one more pestilence to my list of "things that are trying to eat my food before I do".  Some weeks it seems that gardening is really just one long killing spree.

For further reading, here is the University of Iowa site from which I borrowed the picture:
http://www.ipm.iastate.edu/ipm/iiin/node/219

And here is a great blog on organic control of Horsed Squash Bugs:
http://onjustacoupleacres.blogspot.com/2012/07/how-to-kill-squash-bugs-squash-bug-eggs.html

Posted by SmartAlex at 3:26 PM