When it comes to protecting your garden from wildlife, an ounce of prevention is worth a pound of cure.  We live about a mile from the city limits on a half mile dead end out in the country and we have all sorts of critters.  Mainly deer, sometimes racoons, occasionally a bear.  Most recently we have acquired a Fisher.  Our friend who bow hunts here caught him on camera running through our backyard in broad daylight.  We also have fours kinds of squirrels, rabbits and chipmunks, but in recent years the red fox and now the fisher have put a dent in the rabbit and squirrel population.
Still, even if we don't have heavy pressure from a particular pest, we like to prepare for the off chance we do.  Several years of bow hunting has reduced our backyard deer count from four to eight twice a day to an occasional weekly visit.  But even a weekly visit can nip off the first bloom of a peony you have been waiting three years for.  Its better to be prepared. 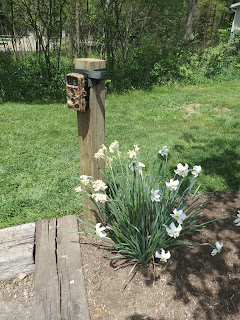 This year I did something I've been wanting to do for awhile.  I installed two game cameras that are trained on opposite corners of the garden and are active from 8:00 pm to 6:00 am.  So far we have only captured brief glimpses of racoons and an undecipherable, up close nose snuffle from either the fisher or a coon.  But that's good.  I don't want my sidewalks to continue to be a deer highway as they once were.
We also installed something my husband has been thinking about for a few years.  Now that I am growing sweet corn every year, it is important to guard against racoons.  They did come into the garden twice last year and ate about a dozen ears of corn.  We did away with those five coons, but of course, there are always more and the only solution for racoons is electric to keep them from climbing the fence panels. 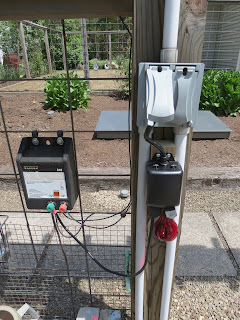 We already had the electric fencer, and power run out to the garden.  I installed a timer that has a second outlet.  On the second outlet we put a 25 watt red bulb so we can verify from the house when the fence is hot.  I don't have the fence plugged in right now, but when the sweet corn is almost ripe, the fencer will run from 8:00 pm to 6:00 am. 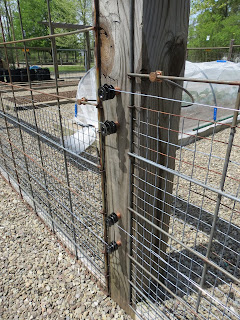 The trick to this electric fence is that anything climbing the panels needs to be grounded when it touches the wire.  Each of the fence panels is connected together with a "jumper" wire and the whole system is grounded by two 8 foot ground rods driven in at each end of the run.  As the fence steps down the grade, the electric wire also steps down.  There are hot wires at two heights.  We used this system when we had chickens, but we only ran one wire around the top.  My husband actually heard the racoon grab that hot wire as he was sleeping with the windows open.  That raccoon made quite a racket when it bit his widdle handses.  Which was strangely satisfying. 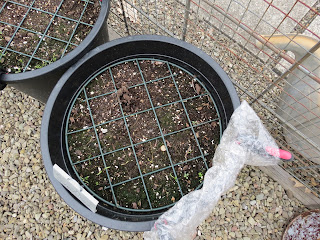 Not all of my garden activities are guarded by a secure fence. There are plenty of pots out in the open. Raccoons explore with their hands.  They can't resist fresh soil. They think there must be something good you've buried there and they have to have a feel. In the past I've had the curious little buggers sift through my newly planted carrot seeds. So much for carefully scattering the seeds. A few years ago I came up with the idea of setting grow-thru grids on top of the soil. You can see here someone has reached in, but when they found the fun interrupted by a grid they gave up. 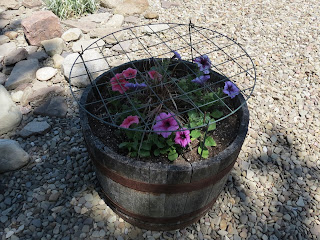 Any newly planted flowers are fair game for deer.  They always have to come take a closer look at whatever is new out there.  People on-line will often scoff at my 5 foot garden fence and claim that hungry deer can jump an eight foot high chain link fence.  I'm sure they can.  But I don't have hungry deer.  I have Snoopy McSnoopington deer.  All they have to do is bump into something unexpected and they move on.  Grow-thru grids temporarily placed over a new planting is sufficient. 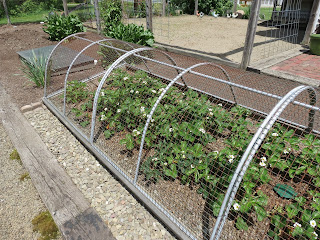 If you have a permanent planting bed outside the fenced area it is probably worthwhile to make some sort of secure cage.  This hardware cloth cage has been protecting the strawberries from deer, rabbits and the bear for many years now.  Unfortunately it isn't any use against chipmunks.  They hit that wire and go through it like cheese through a grater re-materializing on the other side.  It would be fascinating if it weren't so annoying.  When the strawberries begin to ripen I have to pin a floating row cover over it with clothespins which blocks their view and access to the luscious berries.  If they were smarter they would chew through the cloth.  Thankfully they are not smart. 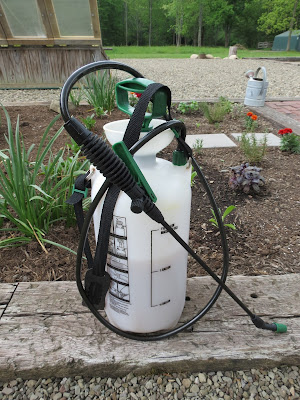 And the final weapon in my arsenal is repellent spray.  I've used a couple different brands over the years.  The one I've settled on is Bonide's Repels-All which I buy by the gallon in concentrate.  I used to put it in a regular spray bottle but this year I went a bit bigger with the 1.5 gallon garden sprayer.  This is just the ticket.  Instead of a laborious Squirt, Squirt, Squirt I can spray a good quantity in the time it takes me to walk past.  I spray my entire landscape after each good rain.  It takes only fifteen minutes with the big sprayer.  One gallon will cover all of my perennials thoroughly five or six times.  That means less time mixing and less time squirting.  I still have the spray bottle on the porch for touch ups.
So that is a synopsis of my multi layered critter control program.  Every time I plant something I have to think about who or what is going to eat it or dig it up then figure out how to prevent it.  And it is much easier to prevent it before the critter finds a yummy treat as a reward.  I have to make sure I take the yummy off it right away.  It is easier to train a deer not to eat something in the first place than to dissuade her after she has developed a taste for it.
Posted by SmartAlex at 6:25 PM